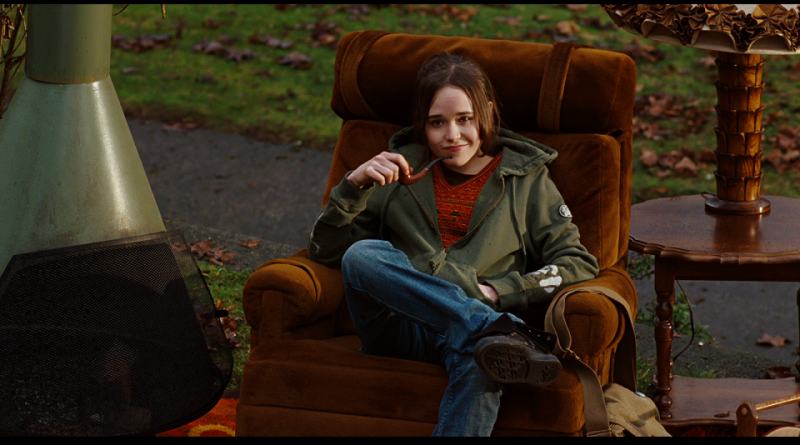 Could Juno could be this years Little Miss Sunshine? Its a cynical, yet irresistible serio-comedy about a pregnant teenager with unquenchable optimism.

Much to her horror, precociously hip 16 year-old Juno MacGuff (Ellen Page) discovers that her one sexual encounter with nerdy, perpetually bewildered Paulie Bleeker (Michael Cera) has resulted in an accidental pregnancy.

It all started with a chair, Juno explains in a clever voice-over narration, tracing the screwball narrative over a period of four seasons, beginning in the autumn, moving into winter and spring, and concluding in summer.

Informing her best-friend, Leah (Olivia Thirlby), surly yet loving working-class father (J.T. Simmons) and dog-obsessed stepmother (Allison Janney) is simple, compared with arranging a legal adoption with the Lorings (Jennifer Garner, Jason Bateman), a perfect couple whom she found through a Penny Saver ad. The wealthy yuppified Lorings live in a suburban McMansion and yearn for a newborn. But complications arise and Juno must, once again, cope with the weirdly unintended consequences of her actions.

This is the third Hollywood take this year on the topic of unexpected pregnancy, following Knocked Up and Waitress. But sassy writer Diablo Cody (AKA Brook Busey-Hunt, a former stripper-turned-blogger) and director Jason Reitman (Thank You for Smoking) defy expectations and stereotyping, treating both adolescent and adult characters with sensitivity and respect.

Ellen Page’s (Hard Candy) performance is perfection, delivering Juno’s witty, self-deprecating, playful dialogue with panache, blithely deflecting tinges of humiliation at school over her increasingly obvious physical condition, while sorting out her feelings for her increasingly smitten boyfriend. And  miracle of miracles  the rest of the cast is equally convincing.

On the Granger Movie Gauge of 1 to 10, Juno is an endearing, terrific 10  a coming-of-age crowd-pleaser thats full of life, laughter and tears.