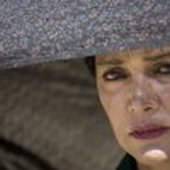 The release date of Shohreh Aghdashloo’s new film “The Stoning of Soraya M.,” could not be more propitious. As the world watches Iran in the throes of what may be another revolution — and finds a new Iranian heroine in Neda Aghan Soltan, who died in the streets of Tehran and again and again on YouTube and on TV screens around the planet — this film, based on the nonfiction book by journalist Freidoune Sahebjam, presents us with two other, real-life examples of courageous Iranian women: Soraya (Mozhan Marnò), a young woman at the cruel mercy misogynist Islamic law, and her aunt, Zahra (Aghdashloo), who dared to ensure that her story was known to the outside world.

MaryAnn Johanson: Do you feel like you have a different perspective on feminism from Americans and Europeans because you grew up in Iran?

Shohreh Aghdashloo: Iranian women have been practicing their freedom and feminism unconsciously perhaps for the last 30 years. Because every time there was a riot or a protest women were at the forefront of the movement, and now we can see that this movement, which is very much a spontaneous movement, is also very much women-driven. We see women’s faces on the streets of Iran, and according to some statistics, 40 percent of the protesters are women. This is in a country that has been constantly suppressing these women and sending them home, or did not allow them higher education at one point. And what we’re seeing is evidence of their constant war with the government and all the restrictions they were confronted with over the last 30 years.

Now the whole world is watching them and can see how proud and strong they are, and they are ready to lose their lives in order to gain freedom. And they’re still coming out, even after Neda. We thought that they might not decide to come out anymore, that they may be afraid, or their parents might not let them come out, but they keep coming out into the streets. And it’s just incredible.

I knew about this proudness of Iranian women. All these women were told at one point that all they could do was to be good mothers and good wives and obey their husbands and do not even say anything, do not have any attitude. Now they’re out and about and fighting shoulder to shoulder with their men.

I don’t remember where I saw this amazing photo, because at my house we’re glued to the television, Internet, Iranian satellite programs. But the picture shows four men with clubs, running, turning back to look at a woman. She’s wearing a chador, she’s covered. The only thing we see is her face and her hand, and of course her hand is bare, she doesn’t have any gun or weapon to defend herself. She’s running after the men and they’re afraid of her! All she’s done is she’s brought her hand out of her chador like a warning. The picture said, “Here comes the upper hand.” And I just love the idea that here comes the upper hand with no guns in it.

I want to make an album of all these amazing photographs. They give me a strange energy to go ahead, to not be afraid, to pick up this role or not. The notion of fear is always there. But what are they saying, that I was courageous to do this role [in *The Stoning of Soraya M.*] — I mean, look at these women! They are the Zahras now.

Johanson: Are there Western misconceptions about Iranian women that you wish you could change?

Aghdashloo:That was the misconception: How come these women do not stand for their rights? How come they do not defend their rights? Of course they were under such pressure, living in the Islamic world, under Islamic laws — they had to *obey.* This was the kind of culture that was forced on Iranian women coming out of the Shah’s reign, having a voice during the Shah’s reign, having their rights during the Shah’s reign, and then all of a sudden being deprived of all of that, stripped of their rights and their thoughts. They were sent back home and asked not to get involved. Living under such circumstances requires a certain kind of strength. Only a few of them got involved — most of them didn’t have courage or the means to do so. They were robbed of their work, of their professions.

But what they did, when they didn’t have access to education, what did they do? They sent their daughters! For the last 30 years, all I would hear from Iranian women is, “My daughter is getting a doctorate,” “My daughter is in Boston University now,” “I’m sending my daughter to Oxford now.” For the last 30 years, they managed to raise daughters who were not only educated, not only well read, they had seen what is going on in the world. And they’re very much on the same page as their mothers. They stayed in Iran and fought not only for their own freedom but for their mothers’ freedom. This is really incredible. Thirty years of perseverance and constant, constant war with a government telling them they’re not worthy of standing shoulder to shoulder with their men.

Johanson: To look at the wide variety of roles you’ve played recently, it looks like you’ve managed to avoid getting stereotyped into a narrow range of characters. I know you did face that early in your career. Is that still a problem? How has Hollywood’s perception of you changed as you’ve been more successful?

Aghdashloo:My brother and I were laughing about this the other day. He asked me, “How come you’re not doing any terrorist characters anymore?” Since *24* I’ve been classified. I have not, *not* received a terrorist role since then. It’s amazing! And Hollywood never tended to turn me into a stereotyped character. Thank God, and thank them! I played an Eastern European doctor in *The Lake House* with Keanu Reeves and Sandra Bullock, and “Kavita Rao” in *X-Men,* then all of a sudden Katherine Bell in *Grey’s Anatomy.* I have to tell you that when I read the piece, I called the writer and said, “I will always be indebted to you,” and she said, “Why?” I said: “I said because of the American name you gave me.” It’s been very nice, not being pinned into a stereotype actor. I refuse to do so. I’m not saying that I won’t play another terrorist role, if it’s a dimensional role, if it’s a meaningful piece. At the end of the day, I’m an actor, and I’m looking for juicy roles.

Johanson: Do you have a dream role that you’d love to play?

Aghdashloo: I’ve done Shakespeare in Iran. I did Lady Macbeth — I was very young for it! — and I’ve done *King Lear,* one of his daughters. I’d love to do Shakespeare here, but I know I can’t, not with my accent and my features, there’s no way. Unless it’s a modern version of Shakespeare.

Another thing I’d love to do and I would never be able to do is Isadora Duncan. I am fascinated by this woman’s life and destiny.

My favorite role that I’ve been wishing I would do is Indira Gandhi, her life and her works and what she did for India, and how important her role was in turning the page on India’s history. This woman is just incredible. I’m hoping that one day I’d be able to do it, but so far I haven’t received any offer. People are telling me know that I should start my own production company and do my own films, and this is what I’m thinking of.

PLEASE NOTE: This article is protected by copyright and may be reproduced only with the expressed and written permission of AWFJ. However, please feel free to link to it and/or use short quotes from it with full attribution.