AWFJ is honored to have presented two EDA Awards at Sheffield Doc/Fest 2012. 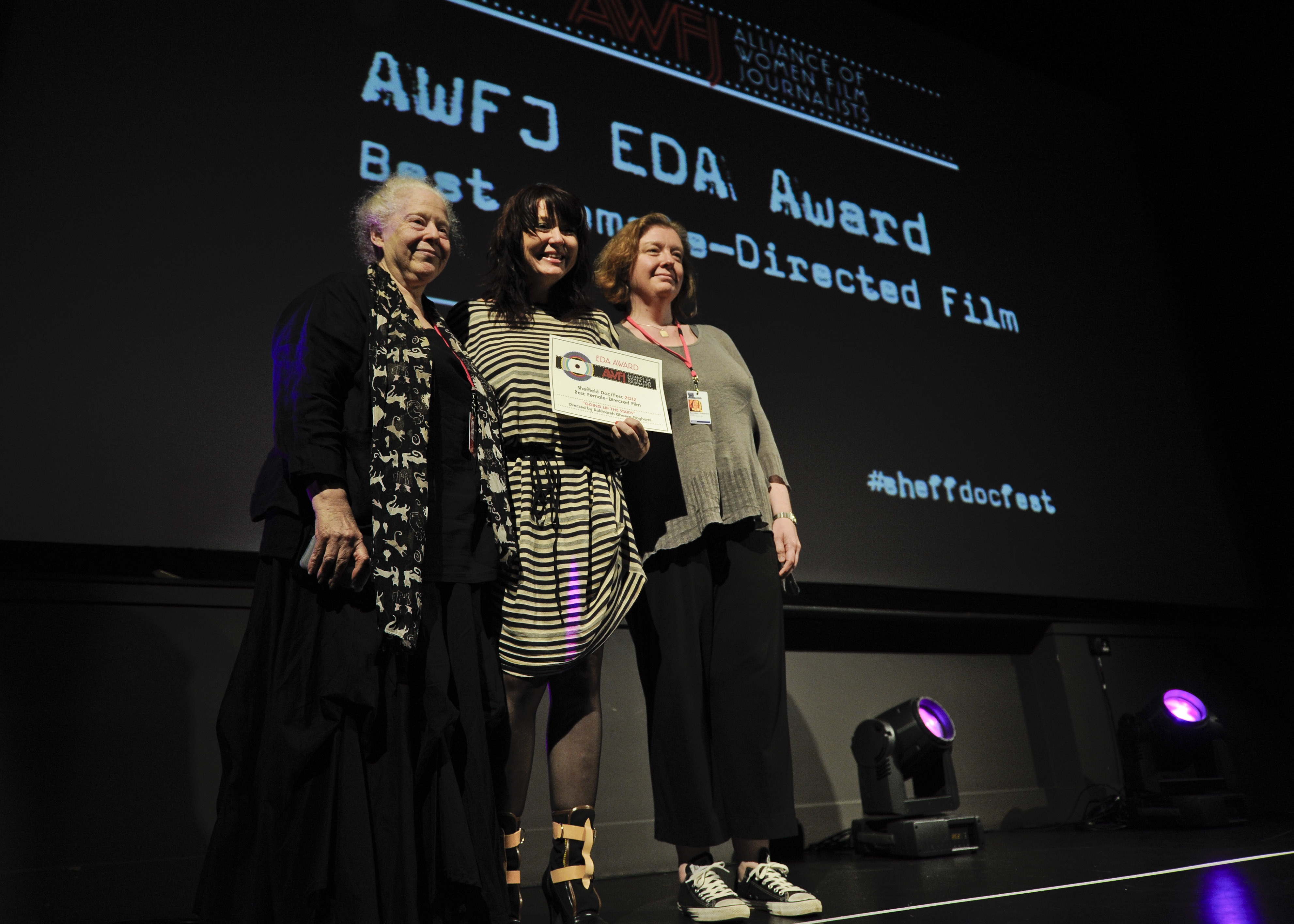 The first EDA Award declared Debra Zimmerman to be “Ambassador of Women’s Film,” a title bestowed in recognition of her tireless efforts and tremendous success as the force of nature behind Women Make Movies, which has promoted women filmmakers and their work for 40 years

The AWFJ EDA Award for Best Female-Directed Film went to Going Up The Stairs, directed by Rokhsareh Gaeme Maghami. According to the AWFJ Jury (comprised of AWFJ members Linda Barnard, Nikki Baughan, MaryAnn Johanson, Karen Krizanovich and Jennifer Merin), the film is about a “most unlikely artist, a 50 year old illiterate Iranian woman who is consumed by her need to create, but has also embraced her role in a traditional marriage to an older man who controls her destiny. Her creativity bursts forth, as though it has a will of its own. and she simply can’t stop painting. Akram’s riotous, colourful, primative canvasses – and her endearing personality – reach out to the viewer and grab hold. We present this year’s EDA Award to GOING UP THE STAIRS. Bravo to director Rokhsareh Ghaem Maghami and your wonderful leading lady, Akram.”

Unfortunately, Rokhsareh Gaeme Maghami was not able to attend the ceremony because approval of her visa was delayed by the British embassy in Warsaw, Poland. But she did send a moving acceptance message: “Repeating the phrase ‘the best female directed’ makes me feel better…. I wish the world could be directed in a female way. If it was so, governments wouldn’t go for a war. I don’t think that embassies would take revenge on artists because of politics. I am sure that artists needn’t to prove that they are rich or married to travel abroad for a festival. They wouldn’t hear ‘sorry, we cannot make a decision’ when they are nominated for an award. Yes, repeating ‘the best femaled directed’ makes me feel better. I am so proud of it. Thank you, Sheffield Doc/Fest staff and AWFJ.”

Going Up The Stairs was among six finalists in competition for the EDA Award. Others included Call Me Kuchu (Directed by Malika Zouhali-Worrall and Katherine Fairfax-Wright), Indie Game: The Movie (Directed by Lisanne Pajot and James Swirsky), Putin’s Kiss (Directed by Lise Birk Pedersen), Scarlet Road (Directed by Catherine Scott), and The Tsunami and The Cherry Blossom (Directed by Lucy Walker).

All female-directed films screening at Sheffield Doc/Fest 2012 were eligible for the award. The finalists were selected by the jury after they’d viewed all screeners submitted for consideration.

The Sheffield Doc/Fest 2012 awards are the second set of EDA Awards presented at film festivals this year. The first presentation was at Salem Film Fest in March. Awards partnerships with other film festivals — both narrarive and documentary — are in the works. Please stay tumed for developments. Meanwhile, complete coverage of the awards at Sheffield Doc/Fest 2012 can be found here