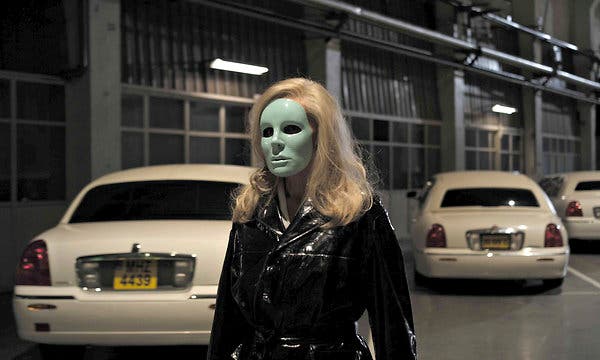 Chauffeured around Paris in a white stretch limousine by elegant Celine (Edith Scob), he begins as a wealthy banker, leaving his family behind in a mansion in the French countryside. As the day progresses, he keeps various appointments, utilizing elaborate makeup and wardrobe to change his disguise and demeanor for each. He’s an aged street beggar and then a ninja warrior, doing fight scenes for an unseen stop-motion camera before sexually coupling with a similarly clad female contortionist.

In a particularly memorable segment, he transforms himself into a flower-eating sewer troll who kidnaps a model (Eva Mendes) from a high-fashion shoot in Pere-Lachaise cemetery, carries her into an underground cavern, strips naked during an intimate interlude, then, finally, refashions her diaphanous gown into a burka and leaves her garbed as an Arab woman. In another, Monsieur Oscar unexpectedly reunites with a former partner (Australian pop singer Kylie Minogue), dressed as an airline stewardess, who warbles an anguished song (“Who We Were”) before she flings herself off a parapet.

As a final bewilderment, Celine returns the limousine to a vast garage named Holy Motors, where, like Herbie in “The Love Bug,” the various luxury vehicles converse before “lights out.”

Inspired, perhaps, by Fellini, Godard and Bunuel, French writer/director Leos Carax (“Boy Meets Girl,” “Les Amants du Pont-Neuf,” “Pola X”) utilizes disconnected, often perplexing episodes – like being trapped in a wild, weird maze with no exit – to dramatize his morbid meditation on mortality, which begins with Carax himself waking up in bed and discovering a magic portal onto the balcony of a movie theater.

In English and French with English subtitles, on the Granger Movie Gauge of 1 to 10, “Holy Motors” is an inscrutable, surreal 6, leaving many, understandably, wondering: “What was that about?”