2013 marks the 20th Anniversary of Sheffield Doc/Fest and they chose to celebrate it in style. 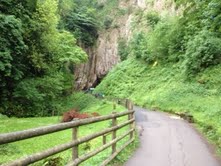 A screening of Nick Ryan’s The Summit took place in High Peak Cavern, Castleton, a rural suburb of Sheffield. The serene surroundings were a stark contrast to the treacherous trip to the top of K2 depicted in the film, via talking heads, re-enactment and found footage. Inside the cave, there was an air of trepidation and excitement about events documented in the film. Upon leaving, the audience was in a more somber mood, as people chatted amongst themselves about the dangers of climbing and the attitudes you adopt for survival in such extreme conditions.

As prelude to The Summit screening, Doc/Fest presented a tribute to the City of Steel with a singular opening night screening/performance of The Big Melt, a mixed media event at The Crucible Theater in central Sheffield. Jarvis Cocker conducted members of Pulp alongside a string quartet, percussionists, a youth choir and the City of Sheffield Brass Band who made a grand and surprising entrance led by the beat of the drummer down the stairs of The Crucible theatre. The live music mixed brilliantly with the montage of images documenting the centenary of steel (using images sourced from BFI archive footage). It was a truly fitting tribute to Doc/Fest’s host city, with Cocker jumping around enthusiastically as images of flat capped men sticking it to the man, female factory workers taking charge in times of war and funny cartoons depicting what the world would be like without steel flitted past in unison with the impressive score.

Attendance this year was a particularly special experience for me. A few weeks earlier I had been asked to take part on the AWFJ jury to vote for the best documentary directed by a woman at the festival. I’m happy to say it was a difficult decision as all the films were of such a high standard but that did leave me in a bit of a quandary.

The winner has now been announced as the joyful Rafea: Solar Mama and I’m glad such a positive film is receiving the award. I had an emotional reaction to many of the films but Mona Eldaief and Jehane Noujaim’s documentary had a triumphant quality to it that completely charmed me. 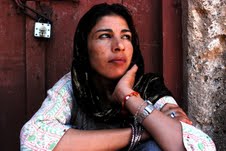 Rafea, the subject of this documentary, is an illiterate Bedouin woman who was given the chance to study in India to become an electrical engineer. She happily takes on the task but finds it difficult to leave her children behind under the care of her lazy louse of a husband who is determined to quash her ambition. Rafea is an inspiration as she battles between her emotions and a desire to take control of her life, and furthermore improve her village’s way of life, through education. On meeting the other women on her course, she strikes up instant bonds as they support and help each other despite not even being able to speak the same language. It’s a beautiful thing to behold. Rafea is a shining example of radical feminism in action in Jordan.

Other films that sparked an interest and I thought were brilliant included Lucy Walker’s The Crash Reel that looks at the life of Kevin Pearce who suffered from brain damage after a catastrophic snowboarding accident. His passion for the sport led him to being chosen to be a part of the Vancouver Olympics team, unfortunately disaster struck before he could compete. Firstly Walker has constructed the documentary extremely well, piecing together found footage to tell Kevin’s story pre and post-accident. And secondly Walker looks at the effect Kevin’s accident has had not only on him but those around him. The most touching moments come from family discussions around the dinner table. Walker has once again put together a comprehensive, good looking and extremely moving film.

Gabriela Cowperthwaite‘s tense documentary thriller, Blackfish, is a psychological study of a whale named Tilikum who has been responsible for the death of at least three people including a SeaWorld trainer. Cowperthwaite explores the effects of captivity on animals and points to the obvious ethical issues raised with treating them as a circus show. There’s a certain naivety to some of the workers, and they look back with shame at what they’ve done, though there is a level of sympathy evoked due to those higher up hiding information from their employees. One astonishing scene involves a trainer repeatedly being pulled under the water by a whale. You’ll feel yourself taking a deep breath for him every time he surfaces – it’s heart in mouth, immersive and compelling viewing at times.

Marta Cunningham delves deep into the headline grabbing story of a school shooting in Oxnard, California where 14 year old Brandon McInerney killed 15 year old Larry King with her debut documentary Valentine Road. Cunningham exposes small-mindedness in the US and charts the events that led up to the shooting. She doesn’t stop there though, presenting a case against the attitudes that fuel hatred towards those who are different, with an emphasis on homophobia and racism. “He was asking for it” a phrase laced with ignorance is voiced by a few – suggesting that Larry King – due to the fact that he was not only proud of his cross dressing but dared to be happy and sassy in it too – deserved to die for simply being himself. The back stories to both of these boys have sad similarities and it’s a gloomy state of affairs that their differences led to such vile consequences. Intolerance is taught rather than acceptance, and Cunningham in trying to make her point tells both sides of the story.

Giedre Zickyte transports you back to 1980s Lithuania with footage of the band Antis who sparked an independence movement in the country through trickery, smarts and music. How We Played the Revolution is an inspiring, witty and exceptionally well documented look at this shifting period. Antis fronted as Soviet- endorsed but through their lyrics and attire mocked those in power. Peaceful protests of people holding hands along the highways are juxtaposed with harsh military retaliation against a nation standing up for independence. You can only admire Antis for being brave enough to put themselves out there. Music and art as motivation in a country that wasn’t allowed to be proud for a very long time is rousing viewing to say the least.

Eva Orner’s The Network is a fascinating look at the burgeoning broadcast media industry in Afghanistan. Orner explores how media is shaping and shaped by its population. Karri Anne Moe happened upon tragedy whilst making her film about Norwegian youth politicians preparing for the 2011 election in Bravehearts. During filming the Utoya massacre occurred, and one of the subjects, Johanne Butenschon Lindheim was on the island when Anders Behring Breivik attacked her camp. An intense account of the incident from Lindheim is palpitating viewing and a reminder of the mark the attack left on the country.

Jury duty proved to be an enjoyable experience and one that not only increased my knowledge of global politics but gave me a chance to champion some extremely talented female filmmakers.

Katherine McLaughlin is a London based freelance film reviewer and features writer for numerous outlets including Cinetalk, Starburst Magazine, New Empress Magazine and Filmoria. Kat's cinematic loves are horror, sci-fi, arthouse and indie with a keen interest in documentaries. She is also a regular attendee of many international film festivals including Berlinale, Toronto Film Festival, London Film Festival and Frightfest.