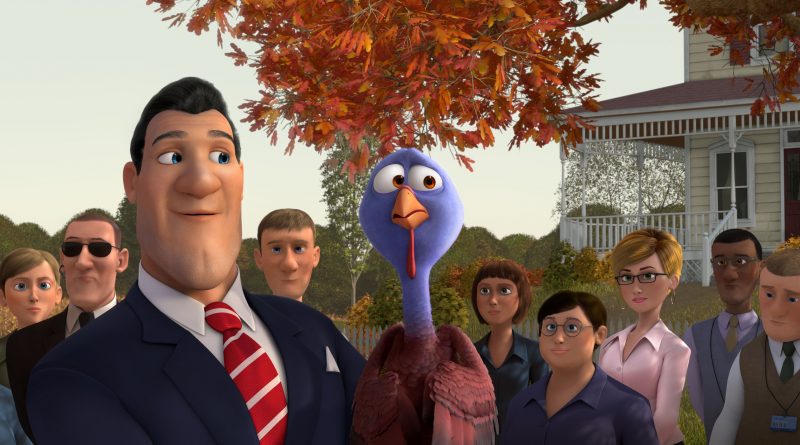 This is an animated, autumnal, buddy-caper about time-traveling turkeys that are determined to change history and keep themselves and their kinfolk off the Pilgrims’ menu on their first Thanksgiving in the New World.

When astute Reggie (voiced by Owen Wilson) tries to warn his free-range flock what’s in store for them, they shun him as ‘anti-corn’ yet, when they discover he’s right, he’s tossed out of the coop. Then he’s rescued by the plucky daughter of the President of the United States, who designates Reggie as this year’s “pardoned turkey.” While devouring delivery pizza and cable TV at Camp David, Reggie is kidnapped by renegade Jake (voiced by Woody Harrelson) and convinced that it’s their destiny to utilize S.T.E.V.E, an egg-shaped, government-built time machine (voiced by “Star Trek” vet George Takei), for a Turkey Freedom Front trip back to the Plymouth Colony, November, 1621. Upon landing, the roosters confront gun-toting colonists, but they’re saved from the Harvest Feast by Jenny (voiced by Amy Poehler), the sassy daughter of Wild Turkey Chief Broadbeak (voice by Keith David), leading to a daring raid on the settlers’ weapons and the arrival of Chuck E. Cheese pizza.

Pixar animator-turned-director Jimmy Howard (“Horton Hears a Who!”) devises admirable camerawork in his fast- paced, meticulously choreographed action sequences. But the shallow script by Howard with producer Scott Mosier is stuffed with cranberry-sauced humor and gentle jabs against factory farming – plus nods to “Back to the Future” and “Bill & Ted’s Excellent Adventure.”

Problem is: it lacks the inherent cleverness and fun of similarly fowl-themed “Chicken Run.” Nevertheless, the vocals are superb and composer Dominic Lewis skillfully utilizes electric guitar and pit bass, along with ethnic instrumentation.

FYI: Farm Sanctuary, the largest farm animal rescue and protection organization in the United States, has designated Reggie and Jake as “spokesturkeys” for their annual Adopt-A-Turkey Project. To learn more, visit adoptaturkey.org or call 1-888-SPONSOR.

On the Granger Movie Gauge of 1 to 10, “Free Birds” is a fancifully festive yet flavorless 5, providing perfunctory amusement for very young viewers.