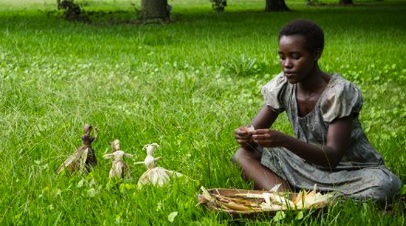 The Alliance of Women Film Journalists is proud to announce the winners of its 8th Annual EDA Awards.

Steve McQueen’s “12 Years a Slave” was a clear winner with six total trophies: starting with Best Film, it swept the AWFJ EDA “Best of” categories with four awards; took another in the female-centric EDA Focus Awards; and earned its sixth win in the EDA Special Mention section.

Among the “BEST OF” EDA Awards—which parallel those conferred by other voting organizations—Cate Blanchett was honored as Best Actress for “Blue Jasmine,” and Matthew McConaughey earned Best Actor for “Dallas Buyer’s Club.” Supporting role awards went to Lupita Nyong’o for “12 Years a Slave,” and Jared Leto for “Dallas Buyers Club. The Best Ensemble Cast prize went to “American Hustle”; the EDA for Best Documentary went to Sarah Polley’s “Stories We Tell”; and Danish filmmaker Thomas Vinterberg’s “The Hunt” was embraced for Best Non-English-Language Film.

The AWFJ also presents unique awards categories that reflect the organization’s mission to celebrate women in filmmaking, as well as the perspective of women in film journalism.

The EDA Focus Awards pay tribute to achievements in filmmaking by women. Among the 2013 winners are Nicole Holofcener, who received the Best Female Director and Best Woman Screenwriter Awards for “Enough Said.” Sandra Bullock grabbed the Kick Ass Award For Best Female Action Star for her role in “Gravity,” and Anna, the heroine of “Frozen” voiced by Kristen Bell, drew Best Animated Female. Lupita Nyong’o received a second EDA for her work in “12 Years a Slave” with the award for Best Breakthrough Performance.

This Year’s Outstanding Achievement By A Woman In The Film Industry, celebrates the achievement of Saudi Arabian filmmaker Haafia Al-Mansour for making “Wadjda” and challenging the limitations placed on women in her culture.

For extra fun, the AWFJ presents the EDA Special Mentions. A sampling of these awards include Best Depiction Of Nudity, Sexuality, or Seduction, awarded to Scarlett Johansson and Joaquin Phoenix for their digital lovemaking in “Her,” as well as the Most Memorable Moment Award, which went to “12 Years A Slave” for the Solomon hanging sequence, and the Most Egregious Age Difference Between The Leading Man and The Love Interest, which went to Michael Douglas and Bre Blair for “Last Vegas.” This the second EDA for Douglas in this category, following Special Mention for the 45-year age gap with his “Solitary Man” co-star Imogen Poots in 2010.

Ridley Scott’s “The Counselor” attracted particular attention from AWFJ members, receiving EDAs for Movie You Most Wanted to Love, But Just Couldn’t and the AWFJ Hall of Shame Award. The film also brought Cameron Diaz the award for “Actress Most in Need Of a New Agent.