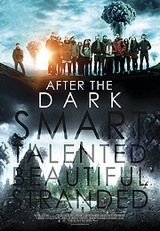 It’s the last day of school before graduation, but philosophy teacher Mr. Zimit (James D’Arcy) isn’t about to let his 20 seniors go without one more brain teaser. The scenario is this: Nuclear armageddon has arrived, and they have mere minutes to decide which of the 21 of them (the students plus Zimit) will hunker down in the convenient nearby radiation-proof bunker, which can sustain 10 people, and no more, for a year until it’s safe to come out. Plausibility isn’t a concern. The issue is: How best to choose from among the random skills and professions the students have picked from a hat to assemble a group of people who might be able to begin rebuilding civilization. You know, one’s an “organic farmer,” one’s a “carpenter,” one’s a “structural engineer”… but there’s one who’s a “poet,” another an “opera singer,” a third a “maker of gelato.” And so on. Read more>>