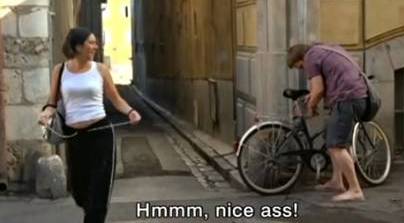 French filmmaker Eléonore Pourriat made her 10 minute short film Oppressed Majority (original title Majorité Opprimée) five years ago. It won an award at a festival in Kiev and then was more or less forgotten. Six days ago she decided to put it on YouTube – and since then, the film has been viewed more than 3.5 million times and counting. Read on…

It is a little gem worth watching: In Oppressed Majority the roles of men and women are reversed. This is a matriarchal society where women have the “important” jobs in companies and men are taking care of the children as we watch an everyday (French) man walking the streets with a baby stroller. While he is out, he gets harassed, called names and even gets assaulted by a group of women. In this vice versa world, women behave like sexists, pee on the streets and jog shirtless as if this was a normal thing.

It is a stunning and fascinating role-switch to watch since it bluntly shows what many women often experience. But viewed from this angle it seems extremely crude and horrifying. The most shocking part is when the man reports the assault and the female police officer implies that his story does not ring true. His wife arrives late to pick him up for the precinct because she “had a meeting” and later even ridicules his outfit by criticizing his short Bermudas and flip-flops.

Pourriat has chosen to film it without any comedy which makes her work more chilling, so much so that it plays on YouTube with a content warning.

So why did the little film suddenly hit a nerve after all this time?

In an interview with The Guardian Pourriat explains “Actually, when I made it I hoped there would be an interest like this. In France five years ago people asked me if being a feminist was so contemporary. Today no one asks. The feminist fight is more important now. Five years ago I felt like an alien. Now my film is making a buzz because rights are in danger. You see that in Spain with abortion rights. The whole thing about marriage for all, the homophobia and sexism. It is like a black tide today in France.”

Feminism has a new hero. And men don’t like it (fat surprise). Pourriat is already being harassed on Facebook and YouTube. The short film clearly has long impact. “I wanted it to be not so realistic but frightening,” she told The Guardian.

Well, she succeeded. It’s scary for men. And just another Tuesday for women.