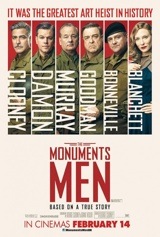 I wouldn’t have thunk it, but director George Clooney, who oozes snark as automatically as he breathes, has made an uncynical movie. Oh, it is as jaunty as the beret that Jean Dujardin’s French art teacher turned art hunter favors, but in a sincere, old-fashioned kind of way. This could almost be a movie rediscovered from the 1940s, and that’s no bad thing. It recaptures the urgent spirit of the time, the sense that everyone’s effort was needed to push back against Hitler’s total war. This isn’t a war movie, though, not like we’re used to: it’s a detective story, a “treasure hunt,” as Hugh Bonneville’s sole Brit on the team writes in a letter home, except “our prizes are Rembrandts and Rubens.” Read more>>