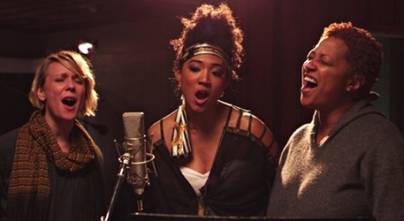 Who are the colored girls who, as Lou Reed sang, go “do do-do do-do”? Who is the woman behind that spine-chilling refrain of “Rape, murder / It’s just a shot away / It’s just a shot away” on the Rolling Stones’ “Gimme Shelter”? This fantastic film — from veteran music documentarian Morgan Neville, and a must-see for any fan of modern pop music, from rock to R&B to soul — introduces us to the extraordinary women you didn’t know were behind some of the songs you know by heart. They are mostly black women, many the daughters of ministers and pastors who honed their talents singing in church choirs. In interviews with them here, they are profoundly generous as they talk about their work making some of the biggest stars in music — from Bruce Springsteen to Bette Midler to Stevie Wonder to the late Luther Vandross — sound better while receiving little to no recognition for themselves: they speak of the joys of collaboration, of being a chameleon, of contributing to a larger sound. Read more>>