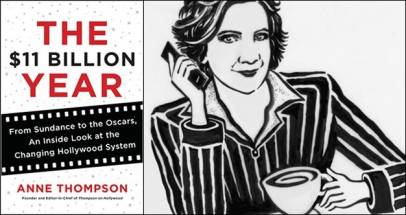 After reporting on everything movies for 25 years, Hollywood pundit Anne Thompson, an AWFJ member, has written her first book. It’s fascinating. We excerpt it here.

Gender politics in Hollywood—as everywhere else—are complex, layered, often unconscious, and difficult to parse. One can argue that things are slowly improving for women in the film industry, but they are still woefully underrepresented in too many areas, from hiring, especially as directors, to roles onscreen.

In 2012, female representation in popular movies hit its lowest level in five years, according to a study by the University of Southern California Annenberg School for Communication and Journalism. That was despite a steady succession of high-profile box-office successes starring women over the decades, from Silkwood and The Rose to A League of Their Own, 9 to 5, The First Wives Club, Sister Act, Mamma Mia!, Bridesmaids, and two recent mighty franchises, The Hunger Games and Twilight.

Among the hundred highest-grossing movies at the U.S. box office in 2012, the USC study reported, 28 percent of speaking characters were female. That marked a drop from 32.8 percent three years ago—even though, as actress Geena Davis pointed out at CinemaCon 2013, 51 percent of the movie going audience is female. In the United States, 40 percent of managerial jobs are held by women, but in Hollywood, the much lower proportions have stayed the same for at least twenty years: in both the Directors Guild and the Writers Guild, only 13 percent of members are women.

According to Martha M. Lauzen, executive director of the Center for the Study of Women in Television and Film, of the top 250 grossing films for 2012, women accounted for only 9 percent of directors. That’s a boost of four percentage points from 2011, but dead even with the percentage of women directors working in 1998. Significantly, Lauzen, a leading researcher in the field who teaches at San Diego State University, titled her 2012 report The Celluloid Ceiling.

At the same CinemaCon at which Davis revealed the latest research findings from the Geena Davis Institute on Gender in Media, which she founded in 2004, Hollywood Reporter editorial director Janice Min assembled and moderated a panel titled “Driving Financial Success: Women + Movies = Bigger Box Office” that included Davis, director Paul Feig (Bridesmaids, The Heat), producer Nina Jacobson (The Hunger Games), Amy Miles (CEO of Regal Entertainment Group), and Vanessa Morrison (president of Fox Animation Studios). They addressed a few of the myriad issues concerning women and Hollywood, both behind and in front of the camera.

Clearly, despite all the evidence over the years showing a consistent number of box-office hits aimed at women, from Thelma and Louise to Sex and the City, the Hollywood studios would rather chase after young men—who account for an average of 44 percent of the opening weekend crowds—with big-budget VFX than feed even modest-budget pictures to the underserved, starving women’s audience.

“There is an overwhelming belief in Hollywood that women will watch men but men won’t watch women,” says Davis. “Which is like the Bible or something. You cannot go against it. It’s a myth that keeps getting propagated, but it’s just not true.”

And yet while young men can be counted on to show up on opening weekends, they are not the most frequent moviegoers, according to MPAA research. Adults twenty-five to thirty-nine are. “There’s this pursuit of the young male, the most distracted demographic, between video games, sports, and girls,” says Jacobson. “There’s a lack of diversity overall which excludes many people as we obsessively pursue a demographic that’s the most elusive of them all. And there’s room for franchises to be made of many different sizes. It does not have to be a $200 million movie where a lot of things blow up. The remedy for a lot of the issues that afflict female representation in movies is also the same remedy for the marketplace.”

A reflection of the industry itself, the Academy of Motion Picture Arts and Sciences also skews to older white males. A 2012 Los Angeles Times study found that nearly 94 percent of Academy voters are white, 77 percent are male, and Academy members have a median age of 62. Blacks make up about 2 percent of the Academy, and Latinos less than 2 percent.

The reasons for Hollywood’s myopia about women—despite consciousness-raising efforts from groups such as Women in Film and Davis’s Institute—are many. But they mostly come down to the entrenched studio habit of making movies by men for men, and of more willingly entrusting male directors with multimillion-dollar budgets. The studios accept the conventional wisdom that movies aimed at young males tend to open and perform better around the world than movies aimed at women, which they
consider to be execution-dependent (in other words, women wait for good reviews and higher quality) and hit or miss.

Women directors are often assigned modestly budgeted romantic and family films, which tend not to get as much marketing support. While there are plenty of women who produce and function in behind-the-scenes roles such as editing, casting, and costume and production design, there are fewer movies made for women, written by women, directed by women, or starring women in the lead role. It’s a vicious cycle.

And while there’s still a (shrinking) list of male marquee movie stars who get paid $20 million to guarantee opening weekends (the list includes Will Smith, Denzel Washington, Johnny Depp, and Robert Downey Jr.), few actresses carry solo films. Most are relegated to romances, or to supporting roles as appendages to male leads, bitch-bosses, fussy mothers, or girlfriends—and they don’t get to topline big-budget global action films the way their male counterparts do. Angelina Jolie is the major exception, followed by Sandra Bullock, Cameron Diaz, and Jennifer Lawrence.

Men have the advantage of a much longer shelf life not defined by their looks: as they age into masculine authority in their forties and the decades beyond, still making love to scads of constantly replenished sweet ingénues in their twenties and thirties, women age out, with few exceptions. Sixtyish character actress Meryl Streep remains eminently bankable because she’s an Oscar perennial. But she is also an anomaly.

In Hollywood, the barriers remain incredibly high for women hoping to direct, unlike the music or publishing industries where it’s relatively easy for exploitable talent to show what it can do. Men are permitted a few mistakes, where women are not. Movie stars Barbra Streisand and Angelina Jolie did not earn much respect for their directing on Yentl and In the Land of Blood and Honey, respectively. The list is long of women who have directed one or two films. Women directors with bona fide big-budget movie careers like Ron Howard or Barry Levinson? Rare.

At her daily Thompson on Hollywood blog, Anne Thompson does more than just break news; she provides an insider’s clear-eyed analysis of a business that defines American culture at home and abroad.Born and raised in New York, Thompson has been a contributor to the New York Times, Washington Post, The Observer, and Wired. She has served as film columnist at Variety, and deputy editor of Variety.com, where she launched Thompson on Hollywood in March 2007. Thompson was the Deputy Film Editor at The Hollywood Reporter, the West Coast Editor of Premiere, a Senior Writer at Entertainment Weekly, and West Coast Editor for Film Comment. She wrote the film industry column Risky Business for L.A. Weekly and the Los Angeles Times syndicate.A graduate of the Department of Cinema Studies at New York University, she hosts the fall semester of “Sneak Previews” for UCLA Extension, and teaches film criticism at USC.