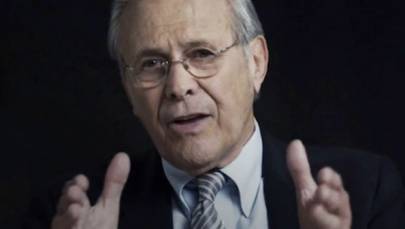 Directed by Academy Award-winning documentarian Errol Morris, The Unknown Known focuses on former Secretary of Defense Donald Rumsfeld, one of the leading architects of the Iraq War. In the guise of a friendly, almost casual conversation, Morris conducts a hard core interrogation of Rumsfeld, asking what he and other power players knew, and when, and how they decided to send Americans to war. The result is a revealing unraveling of bureaucratic knots and double-speak that characterized the Bush administration. AWFJ Movie of the Week panelists felt that The Unknown Known is one of this year’s scariest horror films to date. To see what AWFJ members have to say about the film, read on…

Loren King: Having Errol Morris as the director alone makes The Unknown Known worth a look. Though not as extraordinary as Morris’ 2003 doc The Fog of War about Robert McNamara and Vietnam, this disturbing portrait of Donald Rumsfeld shows that the former Secretary of Defense during the Iraq debacle still doesn’t get it. A revealing look at bureaucratic hubris and double-speak, it’s one of the scarier horror films I’ve seen in the past year.

Nell Minow: The Unknown Known looks like a penetrating follow-up to the riveting Fog of War from director Errol Morris. This time, it is former Secretary of Defense Donald Rumsfeld who looks into the Interrotron to answer — or let us see that he will not answer — questions about the decision to go to war in Iraq.

Jennifer Merin: In this intensive, persistent Interrotron interrogation of Donald Rumsfeld, Errol Morris gets America’s former Secretary of Defense to drop his pants — all they way. And, what we see ain’t pretty.