This month, AWFJ’s Spotlight is focused on Scarlett Johansson whose bold career choices include edgy April opener Under the Skin.

It took British director Jonathan Glazer a decade to make Under the Skin. Scarlett Johansson stuck with him all the way.

Apparently Glazer needed the time to figure out how to effectively refocus the sprawling narrative presented in Michel Faber’s sci-fi bestseller for the screen. Put simply, the story is about an alien who transforms into a woman and devours humans. Grazer’s take was to make for more mystery by eschewing exposition. The script had to be just right. And, casting was critical. 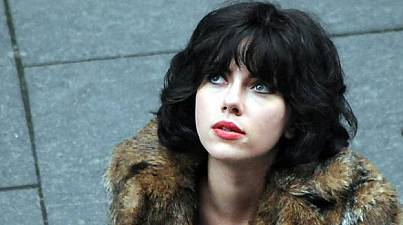 At first, Glazer wanted an unknown actress to play the lead in the low-budget film, but then he decided Scarlett Johansson would be perfect as the alien-cum-femme-fatale.

Once she signed on, the Hollywood star whose career has been steady ascending during the ensuing years, persisted faithfully with the project, collaborating with Glazer in its development, until it was realized.

The result is the artsy, edgy, visually stunning film that premiered with good reviews at Telluride Film Festival and was, shortly thereafter, booed at the Venice Film Festival, where it seemed to leave viewers scratching their heads about it’s meaning. We find the controversy intriguing. 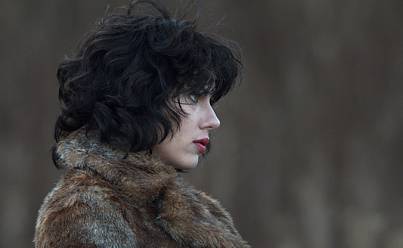 Under The Skin has barely any dialogue. Much of the film is shot inside a van or from the inside of a van that’s driven by Johansson, almost unrecognizable as she’s clad in a wig, fake fur and cheap jeans.

She’s wheeling through the streets of Glasgow, gazing through the window, on the lookout for men to pick up and devour. The men are mesmerized by this dazzling beauty who drops all of her clothes at the drop of a hat.

Fascinating fact: many of the men who are filmed as victims are reportedly not actors and were, indeed, ambushed by Scarlett in her van. They must have been as surprised to find themselves cast a characters in a film, just as their characters were surprised to find Scarlett cast as an Earth-savvy alien who knows that appearing as a beautiful naked female is a great way to lure victims. Baffled men! Clever alien! Bravely bare Scarlett! 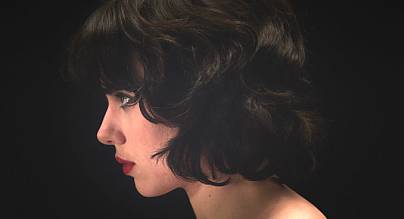 Scarlett Johansson really shows acting chops in Under the Skin. Her characterization is unlike anything we’ve seen her do before.

It’s a delight to watch her work her way through this mostly silent, very sensually feminine portrayal of a strange creature whose behavior and character arc are compelling even in the absence of strong plot exposition.

As in Spike Jonze’s Her – where she appeared only as the seductive voice of an operating system with whom Joaquin Phoenix falls in love – Scarlett brings something special to this indie movie that makes it mesmerizing. People will either love or hate Under the Skin. But they will all agree that Scarlett is delicious. 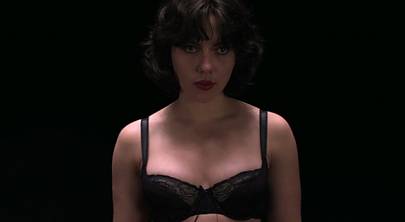 Johansson continues to push boundaries in three upcoming films: She’s back as Black Widow in Captain America: The Winter Soldier, and there are rumors that she might get her own Black Widow movie spin off. In Luc Besson’s Lucy (opening August 8), she plays a kick ass woman whose brain goes into overdrive after absorbing drugs that give her superpowers. And, Avengers 2: Age of Ultron is in the pipeline for 2015.

After finishing that film she can concentrate on just being a hot mama — she is, after all, expecting her first child with her fiancé Romain Dauriac.

Why we chose her:
Because any actress who does not physically appear in a movie at all (Her) and then bares it all in the next (Under the Skin), deserves massive applause for her her bold choices.