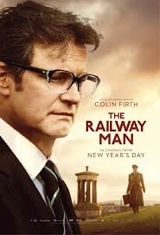 The Railway Man starts out like a sweet little romance, when Colin Firth meets Nicole Kidman, somewhere near Edinburgh in 1980, on a train he’s only on because his encyclopedic knowledge of train schedules is allowing him to compensate for an unexpected delay in his travel plans. “I’m not a trainspotter,” he assures her, “I’m a railway enthusiast.” Later, he is able to contrive a second meeting with her because of his, yes, trainspotting superpower. Soon, they are getting married. But this is not a sweet little romance. It’s a story about PTSD and an urge for revenge that turns into a desire for reconciliation and forgiveness. Read more>>