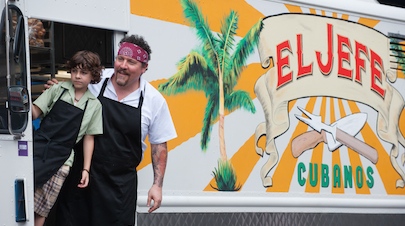 Opening May 9, the AWFJ Movie of the Week is Chef. In this deliciously funny comedy, writer-director Jon Favreau stars as a talented chef who quits his high-profile job at a prominent Los Angeles restaurant over creative differences regarding cuisine. His recipe to maintain his culinary integrity involves relocation to Miami, where he opens a food truck, and rekindles his passion for life and love. Favreau’s high-profile supportive cast includes Dustin Hoffman, Robert Downey, Jr., the red-hot Scarlett Johansson, John Leguizamo, Sofia Vergara and Bobby Cannavale. The comedy marks Favreau’s return to the comedic roots he planted when he launched his career back in 1996 with the breakout indie hit, Swingers, which he wrote and starred in with Vince Vaughn. Read on…

Kristy Puchko: I’m hearing great things out of SXSW and Tribeca about how Jon Favreau has redeemed himself, reminding audiences why we all clung to him as a filmmaker, thanks to this warm-hearted and lively comedy. Read review.