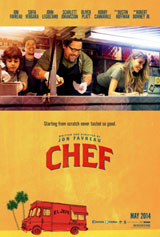 As a critic, it’s impossible to watch Jon Favreau’s Chef and not feel like he is speaking directly to you. I don’t mean in some abstract manner.Chef puts critics on blast, as its plot pivots on the push-and-pull relationships of critics and creators. But it doesn’t just lash out at critics.Chef also recognizes what critics and creative hold in common. It’s a strange thing to feel called out and ultimately understood. But Favreau has always been a filmmaker with a generous spirit and depth. It’s great to see him get back into a film that allows him to show it.