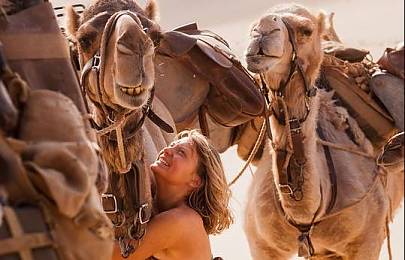 Opening May 23, the AWFJ Movie of the Week is Tracks, an exquisitely filmed, fact-based adventure that is iconic in its validation of one woman’s dreams and determination. Mia Wasikowska stars as Robyn Davidson, who set out on a nine-month journey across Australia’s expansive desert, from Alice Springs to the Indian Ocean, with only her dog and four camels. Based on Davidson’s eponymous memoir, the film co-stars Adam Driver as a National Geographic photographer—and on-again, off-again romantic interest—who documents her journey. With its breathtaking cinematography and inspirational story, Tracks, is a richly satisfying cinematic experience. In limited release, wider in September. Read on…

MaryAnn Johnson: My pick is Tracks, a gorgeous movie about one woman’s true-life adventure, the likes of which we rarely see on film. Read review.

Anne Brodie: Tracks is a fact-based story of a woman who set off on a solo walk across Australia’s unforgiving deserts with camels as her sole companions. It’s stunning in plot and cinematography as she explores what it means to be alone. A breathtaking film with great performances by Mia Wasikowska, Adam Driver and the characters she meets along the way.

Jennifer Merin: My pick is Tracks. In this exquisitely realized truth-based odyssey across Australia, Mia Wasikowska stars as Robyn Anderson, the woman who made the original journey and wrote the book. The film is iconic in its validation of women”s dreams and determination. It’s a richly satisfying experience.