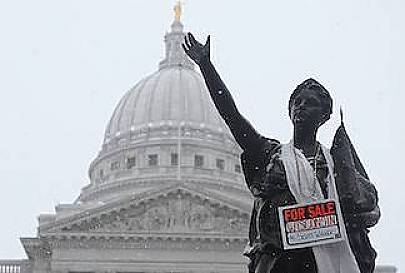 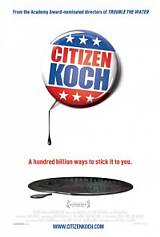 Opening June 6, the AWFJ Movie of the Week is Citizen Koch, an eye-opening documentary that follows the rise of the Tea Party and the impact that unlimited, anonymous spending by corporations and billionaires has on the electoral process in America. Filmmakers Carl Deal and Tia Lessin reveal how the billionaire Koch brothers used their significant financial capital to alter the political landscape of Wisconsin and how those changes changed the lives of three life-long Republicans working for the state. The must-see documentary features interviews with David Koch, Charles Koch, Sarah Palin, Russ Feingold, Scott Walker, and Gwen Moore. Read on…

Loren King: Citizen Koch is a must-see for anyone concerned about what’s happened to American democracy. The documentary follows the flood of special interest money influencing politics to the U.S. Supreme Court’s 2010 ruling in Citizens United. It shows how the billionaire Koch brothers financed Tea Party candidates and rallies and helped Wisconsin Governor Scott Walker strip state workers of their union rights in 2011. Labor groups had nowhere near the capital that the Koch brothers had to help finance union busting. If anything, the film could have hit even harder but it still packs a punch for anyone who still believes in government for and by the people.

Nell Minow: Citizen Koch reveals that politicians no longer get their jobs through elections; their positions are all but auctioned off, and this serious, thoughtful, compellingly presented but never-shrill documentary shows us the corrupting effect that undisclosed private money has on democracy.

Jennifer Merin: An alarming expose of how big money — the ultra-conservative Kochs, to be specific — buy political influence and politicians and influence public policy in the USA. This must-see documentary is a call to action for all citizens who value their constitutional rights.