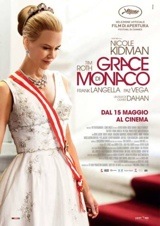 This “fictional account inspired by real events” isn’t exactly emotionally enthralling, which I suspect is an unintended side effect of director Olivier Dahan and screenwriter Arash Amel consciously avoiding the “fairy tale” Hollywood star Grace Kelly’s life became after she married Prince Rainier of Monaco in 1956. Though why they imagine that “dour” and “chilly” equals “real,” I don’t know. That said, there’s still much that’s intriguing in this portrait of a woman adapting her skills to a new situation, in its acknowledgement — still a subversive one half a century later! — that women need more than a husband and kids to be happy, and in its sly look at how women wield power in whatever ways they can. Read more>>