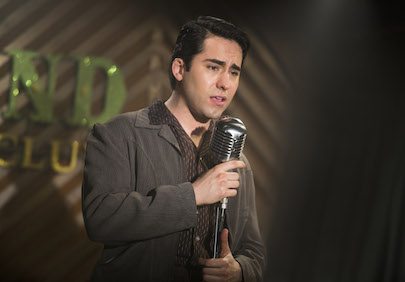 Opening June 20, the AWFJ Movie of the Week is Jersey Boys, the film adaptation of the Tony-award winning musical from director Clint Eastwood. The musical chronicles the rise and fall of the 1960s rock ‘n’ roll group The Four Seasons, led by Frankie Valli. While best known for tough guy films, Eastwood is also a musician and composer, which makes his involvement in bringing this popular musical from stage to screen even more interesting. Not to mention that Marshall Brickman and Rick Elice, who wrote the book for the musical, have written the script, making for a smooth transition to the screen. Of course the film’s impressive pedigree doesn’t matter much if the music isn’t right and from the sound of things, the songs still pack a punch. Read on…

Anne Brodie: Jersey Boys is rousing, fun and beautifully made. There’s none of the saccharin gloss one might expect, given the mob connections and inter-band conflicts. And the music, wow! Read more>>>

Leba Hertz: My choice is Jersey Boys. I’m taking a chance that Marshall Brickman and Rick Elice’s book holds up with Clint Eastwood supplying a surprising comprehension of how to do a musical on screen.

Loren King: Jersey Boys is my pick because I’m interested to see what music aficionado Clint Eastwood does with this bona fide Broadway musical. I thoroughly enjoyed Jersey Boys onstage because the rags to riches showbiz tale of Frankie Valli and the Four Seasons transcended jukebox musical trappings. As its title implies, there are not many women in the story but if Eastwood does it justice, it’s a Dreamgirls-like paean to 60s-era music and the music business.

Pam Grady: Clint Eastwood has never made a musical before now. It will be interesting to see what he brings to the genre with the debut of his adaptation of the Tony-winning Frankie Valli and the Four Seasons’ musical Jersey Boys.