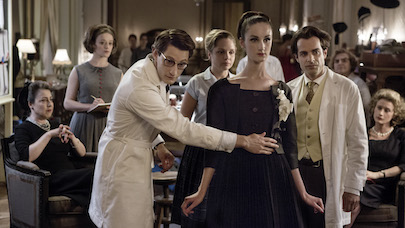 Opening June 25, the AWFJ Movie of the Week is French director Jalil Lespert’s Yves Saint Laurent, a richly evocative period piece that chronicles the life of the legendary fashion designer. The film stars Pierre Niney as Saint Laurent. At the age of 21, none other than Christian Dior appointed Saint Laurent to take over as head designer for his line. His first collection for Dior debuted in the spring of 1958 and instantly catapulted him to the heights of haute couture’s elite class. At that show he would also meet Pierre Bergé (Guillaume Gallienne), patron of the arts, future love of his life and lifelong business partner. Three years later, the two founded the Yves Saint Laurent Company, which would rapidly become one of the biggest luxury powerhouses on the planet. Read on…

Jennifer Merin: This beautifully rendered biopic about one of the fashion world’s most fascinating and influential contemporary style shapers offers a captivating glimpse into the dramatic relationship that ruled his life and sustained him through devastating bouts of depression. Yves Saint Laurent’s story is fascinating.  Pierre Niney and Guillaume Gallienne give brilliant performances as Saint Laurent and his lifelong companion, Pierre Bergé, respectively.  And, cinematically, the film is a visual delight.

Leba Hertz: Fashion mavens will either love Yves Saint Laurent or hate it. As a fan of Project Runway I appreciate how this great fashion designer rose to the ranks of one of the greatest in the industry. If you are a biopic fan, this will your appetite at least a little.