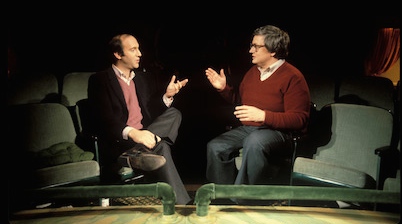 Opening July 4, the AWFJ Movie of the Week is Life Itself, a moving tribute to America’s favorite critic, Roger Ebert, from acclaimed director Steve James and executive producers Martin Scorsese and Steven Zaillian. Ebert was a Pulitzer Prize-winning film critic for the Chicago Sun-Times who became a household name when he starred opposite Gene Siskel on the PBS show Sneak Previews, which popularized the phrase “Two thumbs up!” Ebert passed away on April 4, 2013 after battling cancer of the thyroid and salivary glands, which robbed him of his ability to speak but never slowed him down in terms of writing. James’ documentary, which is based on Ebert’s memoir of the same name, recounts Ebert’s life with reverence and a deep respect. It’s a must-see for anyone who loves movies. Read on…

Nell Minow: Life Itself, the Steve James documentary about Roger Ebert, is not a movie about a film critic. It is a movie about a life—a life of passionate engagement and love all the sweeter for coming late. One of the best films of the year.

Jennifer Merin: Anyone with a taste for movies will relish in filmmaker Steve James’ wonderful biodoc and tribute film about the late film critic Roger Ebert. The movie captures Ebert’s smarts, wit and passion, and charts the course of modern cinema as it does the life and career of the beloved critic. All thumbs up for this film for sure!