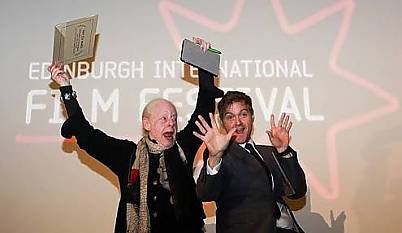 The Alliance of Women Film Journalists (AWFJ) has extended its EDA Awards festival program to include presentation of juried EDA Awards for best female-directed narrative and documentary features at the 2014 Edinburgh International Film Festival, held from June 18 to 30, 2014. The EDA Award winners were announced and EDA Award certificates presented by AWFJ President Jennifer Merin at EIFF’s awards ceremony on June 27, at Edinburgh’s FilmHouse. AWFJ jurors presented three awards to female-directed films at EIFF this year.

Best Female-Directed Narrative Feature: Finsterworld, a first narrative from German documentary maker Frauke Finsterwalder. AWFJ Narrative Jurors MaryAnn Johanson (Chair), Beth Hanna, Katherine Brodsky, Monika Bartyzel, Julide Tanriverdi and Laurie Coker commended the film for its “smart and sophisticated screenplay and beautifully sensitive cinematography that give us intimate access to the interwoven stories of several delightfully quirky and very engaging characters as they struggle to express their true identities and realize their dreams in a world rife with alienating challenges. We look toward to more from frauke finsterwalder, with her unique vision and voice.”

Special Mention for Documentary Artistry and Impact, to My Name is Salt, an extraordinary first feature from Farida Pacha. The documentary jurors found the film to be “a masterpiece of the observational style. In following a single family of salt farmers during their eight month seasonal work cycle in a remote region of India, Pacha introduces us to a uniquely challenging traditional lifestyle, one that exemplifies the way in which human perseverance and dignity transcend circumstance. The filmmaker’s respect for her subjects shows in every frame of Lutz Konnermann’s exquisite cinematography. We congradulate Pacha on her achievement in a this film and can’t wait to see more of her work!”

“AWFJ celebrates women filmmakers by presenting EDA Awards at select film festivals and events. It is a particular pleasure to partner with EIFF which has long been a beacon for top filmmakers, and to Edinburgh, which has become a focus for the most creative people in the world,” said AWFJ President Jennifer Merin in announcing EDA Awards @ EIFF.

Diane Henderson, Deputy Artistic Director of EIFF said “EIFF has a long and varied history of celebrating women filmmakers from all over the world, and the EDA Awards are a wonderful opportunity for us to continue this support. We very much look forward to working with the AWFJ on this initiative, highlighting the enormous talent from women filmmakers on display at the 68th Edinburgh International Film Festival.”

To follow are the Nominees and Jurors for the 2014 AWFJ EDA Awards @ EIFF. Jurors come from the ranks of AWFJ members in the U.S., U.K. and Canada (see biographies appended below).

ABOUT THE AWFJ and EDA AWARDS
The Alliance of Women Film Journalists, Inc. (AWFJ), a not-for-profit corporation, is an international association of leading professional female movie critics, reporters and feature writers working in print, broadcast and online media, dedicated to supporting film work by and about women – both in front of and behind the cameras – through intra—group promotional activities, outreach programs and by presenting the annual AWFJ EDA Awards in recognition of outstanding accomplishments (the best and worst) by and about women in the movies. In 2012, AWFJ launched its festival awards program, presenting EDA Awards to women filmmakers in partnership with select film festivals and organizations. Film festivals to date include Salem Film Fest and St Louis International Film Festival in the U.S., the Whistler Film Festival in Canada and Sheffield Doc/Fest in the U.K. , and P.O.V., the renowned documentary series that airs on the national Public Broadcasting Service (PBS) in the United States.

AWFJ’s online magazine, Women On Film, highlights women’s achievements with two regular features: the AWFJ Movie of the Week and AWFJ SPOTLIGHT, a monthly column recognizing a woman’s outstanding achievement in the film industry. Women On Film also provides members with an outlet for original content and aggregates members’ reviews, interviews and commentaries. Women On Film is found at www.awfj.org.

NARRATIVE JURY:
MaryAnn Johanson (Narrative Jury Chair) is a freelance writer on film, TV, DVD, and pop culture. A New Yorker now based in London, she is webmaster and sole critic at FlickFilosopher.com, which debuted in 1997 and is now one of the most popular, most respected, and longest—running movie—related sites on the Internet. Her film reviews also appear in alternative—weekly newspapers across the U.S. Johanson is one of only a few film critics invited for membership in The International Academy of Digital Arts and Sciences, the organization of leading Web experts, visionaries and creative celebrities that presents the prestigious Webby Awards. She’s on AWFJ’s Board of Directors and is a member of the Online Film Critics Society. She’s appeared as a cultural commentator on BBC Radio, LBC—London, and radio programs across North America, and she served as a judge at the first Science Fiction, Fantasy and Horror Film Festival at the 2003 I—Con, the largest SF convention on the East Coast. She is author of The Totally Geeky Guide to The Princess Bride, and an award—winning screenwriter.

Katherine Brodsky has contributed to Variety, Entertainment Weekly, USA WEEKEND Magazine, MovieMaker Magazine, The Independent, Stage Directions, MovieWeb.com, CountingDown (a Dreamworks SKG Company), Writer’s Digest, and many others. For her stories, Katherine has had a chance to interview a diverse range of ‘intriguing’ personalities, including Oscar, Emmy, Grammy, Pulitzer, Tony, and Genie Award winners & nominees.

Monika Bartyzel is a freelance writer and editor, and creator of Girls on Film – a weekly look at femme—centric film news and concerns, currently residing at The Week. Her work has appeared on sites including The Atlantic, Movies.com, Moviefone, Collider, and the now—defunct Cinematical, where she was a lead writer and assignment editor.

Laurie Coker began writing film reviews for the Williamson County Sun in Georgetown, Texas in 1999 and moved to the Hill Country News in Cedar Park, Texas two years later. In 2008, she started a website, True View Reviews, offering reviews, coverage of local and movie news and offering free passes to screenings. Additionally, Laurie writes reviews for We Live Film, a national website based out of Philadelphia. Laurie, an Austin resident for almost 30 years, holds two bachelors and one master degree from The University of Texas at Austin. She is a full time English teacher at Westwood High School.

Beth Hanna is a cinephile and film writer living in Los Angeles, with a master’s degree in cinema and media studies from UCLA, and a bachelor’s degree in film studies from the University of Colorado at Boulder. She has previously worked as an associate programmer for AFI FEST 2013; for AFI FESTs 2009 and ’10, where she oversaw the screen education program, screening a selection of festival titles for middle— and high—school students from across L.A.; and in the film programming department at the American Cinematheque, where she programmed the Cinematheque’s first—ever Rainer Werner Fassbinder and Luis Buñuel retrospectives in 2012. You can follow Beth on Twitter, and read her film reviews and features at Indiewire’s Thompson on Hollywood.

Julide Tanriverdi left her native Berlin in September, 1996, to become a New York correspondent for Axel Springer, the prominent German publishing conglomerate. She has contributed to Bild (Europe’s largest daily newspaper), Bild am Sonntag, Die Welt, Berliner Morgenpost and Hamburger Abendblatt. In 2002, she left Axel Springer to become New York Bureau Chief for Gala, the German weekly entertainment magazine (similar to PEOPLE). She covers film festivals, including the Berlinale, Sundance and Toronto Film Festival, on a regular basis, interviews Hollywood stars and filmmakers and does reports from film sets. She writes the monthly SPOTLIGHT feature for Women on Film, the AWFJ’s online magazine at www.awfj.org.

Jennifer Merin (Documentary Jury Chair) is the founder and president of the Alliance of Women Film Journalists (AWFJ). She writes and edits Documentaries.About.com, the non—fiction section of one of the top 20 websites in the US. She’s film critic for the award—winning Womens eNews; edits Women On Film, the online magazine of the AWFJ; and contributes to Westwood One’s nationally syndicated radio show, “America In the Morning.” She’s member of the Broadcast Film Critics Association.

Holder of an MFA from Tisch School of the Arts, Merin transitioned to journalism after a career as an actress, performing LaMamma, Long Wharf Theater, American Place Theatre, and with The Living Theater, Shirley Clark’s Video Teepee, and Shuji Terayama’s theater company in Tokyo. She was an O’Neill Theater Center National Critics’ Institute Fellow, and the institute’s Coordinator, and has taught theater and criticism at the universities of Wisconsin and Rhode Island.

Rebecca Murray has reviewed Hollywood movies and interviewed actors, writers, directors, and producers for more than a decade for About.com and now helms the popular online movie site ShowbizJunkies.com. She is a member of the San Diego Film Critics Society, an Approved Tomatometer Critic, and belongs to the Society of Professional Journalists. In addition, Rebecca is a member of the Broadcast Film Critics Association, a group of professional movie critics whose votes decide the winners of the annual Critics’ Choice Movie Awards (broadcast on The CW). Rebecca covers countless movie premieres and other Hollywood special events, interviewing over 1,000 celebrities on red carpets, as well as conducting hundreds more print interviews.

Sheila Roberts is an entertainment journalist and film critic who lives in Los Angeles where she interviews leading film and television industry figures and writes about film for a variety of print and online publications includingCollider.com, MoviesOnline, MovieScope Magazine, Cineplex and UCLA Magazine. She is a graduate of the UCLA School of Theater, Film and Television and holds an MA in Cinema & Media Studies and an MFA in the Producers Program.

Nikki Baughan is the editor of MovieScope Magazine, for which she also writes movie reviews and commentaries. She is based in London.

Cate Marqius is a film critic and historian based in St. Louis, Missouri. She reviews film for the St. Louis Jewish Light weekly newspaper and Playback: stl website, as well as other publications. The daughter of artist Paul Marquis, she was introduced to classic and silent films by her father, as well as art and theater. Besides reviewing films, she lectures on film history, particularly the silent film era, has served on the board of the Meramec Classic Film Festival and is a long—time collaborator with the St. Louis International Film Festival, serving on various juries. She is a member of the St. Louis Film Critics Association.