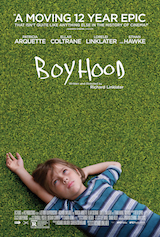 We’ve seen children grow up onscreen before. Ron Howard. Jodie Foster. All the Harry Potter kids. But not like this. Not in a single film. Richard Linklater had the audacious idea to shoot a story about almost the entire span of one boy’s childhood using the same actors over the course of a dozen years. Audacious because such a long production time — probably the longest ever in the history of cinema — comes with unique challenges. Audacious because in retrospect, it seems like such an obvious idea, and yet either no one thought of it before or no one had the nerve to try it. Read more>>