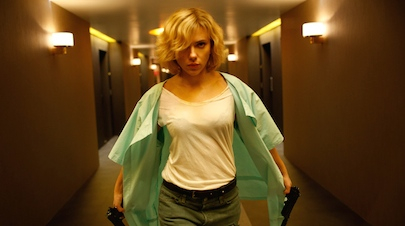 Opening July 25, the AWFJ Movie of the Week is Lucy, the latest action movie from writer-director Luc Besson, best known for The Fifth Element, La Femme Nikita and The Professional. Action It Girl Scarlett Johansson stars as a woman who gains the ability to use one hundred percent of her brain function, turning her into an unstoppable killing machine. Besson has created his share of strong, female action heroes and Johannson is turning into that rare actor who is interesting to watch in both big-budget action movies, like The Avengers, and riskier films, like Under the Skin. It will be fascinating to see what Besson and Johansson have created together in Lucy. Read on…

MaryAnn Johanson: My pick is Lucy. All eyes will be on Scarlett Johansson as she moves into a lead action role for the first time, and it’s likely that Hollywood will — fairly or not — be gauging the future of female action heroes on the performance of this film.