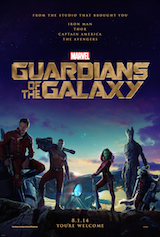 It begins in 1988, when grief-stricken, nine year-old Peter, whose cancer-ravaged mother has just died, is abducted from Earth and zapped into the cosmos. Now thirtysomething, he still carries his Walkman and earphones, bopping to a mixtape of funky ‘70s songs, like “Hooked on a Feeling,” “Cherry Bomb,” “Come and Get Your Love,” and “I’m Not in Love.” Piloting his own spacecraft, Peter is an intrepid mercenary, scavenging once-populated-but-now-deserted planets, on the payroll of a blue-skinned Ravager, Yondu (Michael Rooker). Dispatched after a mysterious silver Orb, Peter discovers it’s also coveted by ruthless Ronan the Accuser (Lee Pace), a villainous warlord who wants to trade it in exchange for the power to destroy Xandar, home to the Nova Corps, the space militia that’s been at war with Ronan’s race, the evil Kree, headed by all-powerful Thanos (Josh Brolin), who appeared during a brief post-credit scene in “The Avengers” (2012).

Humorously adapted from the Marvel comic book series by Nicole Perlman and director James Gunn (“Slither”), it’s an origin story, filled with irreverent one-liners and running gags, propelled by wise-cracking Chris Platt in his first leading role after years of playing supporting parts in “Her,” “Zero Dark Thirty,” “Moneyball” and TV’s “Parks and Recreation.” Completing the ensemble are Benicio Del Toro as The Collector, Djimon Hounsou as Ronan’s lieutenant, Glenn Close as Nova’s Defense Minister and John C. Reilly as her Corpsman.

On the Granger Movie Gauge of 1 to 10, “Guardians of the Galaxy” is an energetic 8. In 3D, it’s goofy, space-faring fun.