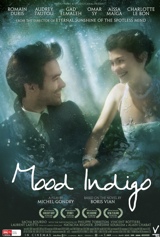 This is not a thing you ever want to hear: “Michel Gondry’s shorter, preferred cut for American audiences.” That was the proud announcement included in a press release about Mood Indigo from a U.S. publicist for the film, and that 90-odd-minute version is the same one I saw at a press screening here in London. Why does Gondry think we English speakers don’t warrant the two-hour-plus version of his whimsical love story? What doesn’t he want us to see? What does he think we can’t handle? Read more>>