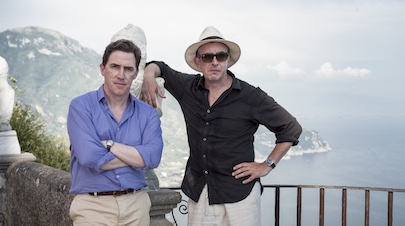 Opening Aug. 15, the AWFJ Movie of the Week is The Trip to Italy, a follow-up to Michael Winterbottom’s 2010 film, The Trip, which reunites comedians Steve Coogan and Rob Brydon for another gastronomic tour around Europe. This time the two cranky comedians are retracing the steps of the Romantic poets’ grand tour of Italy. Following the successful formula of the first film, Winterbottom focuses as much attention on the mouth-watering meals as he does the impersonation-laced banter between the two stars. They enjoy culinary delights in gorgeous settings from Liguria to Capri while riffing on subjects as varied as Batman’s vocal register, the artistic merits of Jagged Little Pill, and, of course, the virtue of sequels. The Trip to Italy melds the brilliant comic interplay between Coogan and Brydon into quieter moments of self-reflection, letting audiences into their insightful ruminations on the nuances of friendship and the juggling of family and career. The result is a biting portrait of modern-day masculinity. Read on…

Pam Grady: The dueling Michael Caines return in The Trip to Italy, as Steve Coogan and Rob Brydon indulge in another hilarious European culinary excursion, trading witty barbs and indulging in one-upmanship as they sample the finest cuisine that Tuscany, Liguria, Rome, and Amalfi have to offer.

Anne Brodie: The Trip to Italy! Brits Steve Coogan and Rob Brydon are the best kept secrets in comedy today – Michael Winterbottom takes a new turn with them and its all wonderful. The stinging wit, sarcasm and churning ill will/friendship make us feel so much better about our own lives, laughter no extra charge.