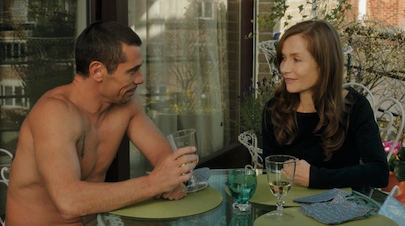 Opening Aug. 22, the AWFJ Movie of the Week is Abuse of Weakness, by French writer-director Catherine Breillat. The film was inspired by Breillat’s own experiences after she suffered a debilitating stroke and fell prey to a notorious con man. Isabelle Huppert stars opposite French rapper Kool Shen. Strong-willed filmmaker Maud (Huppert) suffers a stroke that leaves her paralyzed on her left side. Determined to pursue her latest film project she sees Vilko (Shen), a con man who swindles celebrities, on a talk show and proceeds to offer him a role in her next movie. Soon Vilko is using the same manipulative charm that he used to con celebrities to get thousands from Maud. While she sees what he’d doing she also feels powerless to do anything about it. Read on.

Loren King: Catherine Breillat’s Abuse of Weakness is the intriguing filmmaker’s most personal film yet. After suffering a stroke, Breillat over time gave would-be actor and con man Christophe Roconcourt thousands of dollars. The film version stars Isabelle Huppert as Maud, a writer/director recovering from a stroke that’s left her partly paralyzed. She seemingly enters willingly into a codependent friendship with Vilko (French rapper Kool Shen), a convicted swindler that Maud wants for her next film. As Maud writes check after check, questions arise about who really has the power in the relationship. Huppert is flat out terrific; her Maud is prickly, vulnerable and tough, all at once.

Anne Brodie: I’m very keen to see Catherine Breillat’s Abuse of Weakness, the true story of her affair with a con artist who took advantage of her just after her debilitating stroke. I interviewed Breillat in person for Sleeping Beauty and she told me the story that happened to her in great, emotional detail. It’s riveting.

Kristy Puchko: Catherine Breillat creates an unapologetic and harrowing portrait of her own personal struggles in a flawed and fascinating film. Read more>>>

Jennifer Merin: Catherine Breillat’s Abuse of Weakness is the famed French feminist auteur director’s somewhat autobiographical narrative about what happened to her when she suddenly suffered a debilitating stroke and was, in her weakened state, taken advantage of by a man who appropriated much of her fortune. The story rolls out without many surprises as Maud, a visionary filmmaker whose independence and determination are dampened by sudden physical disability and emotional vulnerability. She casts a con man (Kool Shen) in her film and quickly falls prey to his manipulative charm. Their relationship is an edgy, tension-filled roller coaster ride that soars and plummets with Maud’s emotional and physical condition. Abuse of Weakness isn’t one of Breillat’s best films, but Isabelle Huppert’s portrayal of Maud is brilliant.