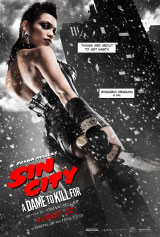 When Robert Rodriguez’s Sin City stormed into theaters in the spring of 2005, it blew me away by it’s brand of over-the-top noir. I’d never seen anything like it — graphic in design, relentlessly violent and gleefully debauched. I saw it four times in theaters. I bought all the graphic novels and devoured them. And then, I eagerly awaited the sequel. Finally, Rodriguez has brought most of his original cast back together forSin City: A Dame To Kill For. But after repeated delays, a staggered production schedule, and nearly a decade since its predecessor, how did this long-awaited follow-up turn out? In a word: YEESH.