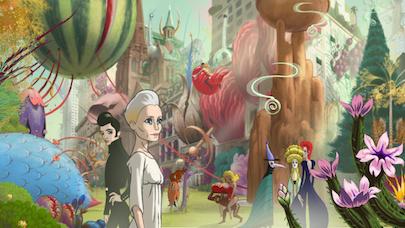 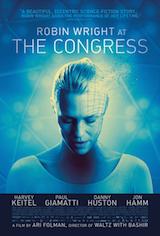 Opening Aug. 29, the AWFJ Movie of the Week is The Congress, from visionary writer-director Ari Folman, whose 2008 animated film Waltz with Bashir was nominated for Best Foreign Language Film. The Congress, based on Solaris author Stainslav Lem’s The Futurological Congress, combines live action and animation to present a unique premise set in a world in the not-too-distant future. It stars Robin Wright, Harvey Keitel, Kodi Smit-McPhee, Danny Huston, Paul Giamatti, and Jon Hamm. Wright, playing a version of herself, accepts a deal brokered by her loyal, longtime agent (Keitel) whereby her digital image will be controlled by one studio for use in any films of their choice, in perpetuity. The compensation allows her to care for her ailing son, but her decision has unforeseen consequences. Read on…

Anne Brodie: The Congress is an effective and original thriller, the latest in the current dystopian future trend. Robin Wright plays a version of “herself” as a Hollywood actress who gives the studio her “image” in perpetuity so that she can always appear young and beautiful in CGI films. The negative ripple effect is devastating and hers becomes a cautionary tale.

Kristy Puchko: The Congess is groundbreaking and breathtaking. Read more>>>

MaryAnn Johanson: My pick is The Congress, a mind-bending extrapolation of the future of entertainment, and a striking commentary on how Hollywood treats women right now. Read more>>>

Jeanne Wolf: The Congress is so unique and Robin Wright’s performance is so brave…it’s a must see film. Read more>>>

Nell Minow: The Congress doesn’t look like anything else. Plus, I have a soft spot for movies that play with the fourth wall.