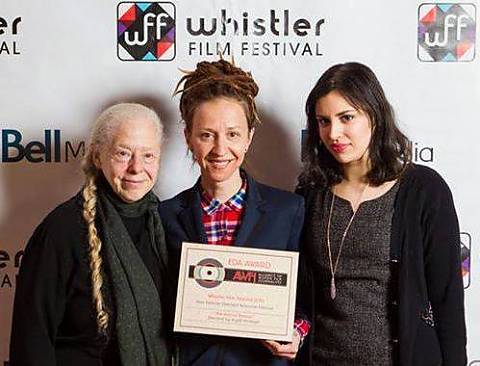 NEW YORK — The Alliance of Women Film Journalists Inc. (AWFJ) is pleased to announce the presentation of juried AWFJ EDA Awards at this year’s Whistler Film Festival, held from December 3 to 7, 2014 in Whistler, British Columbia.

AWFJ returns to Whistler Film Festival for the second year running with the presentation of EDA Awards for best female-directed films in both both narrative and documentary feature categories. Read on…

“The Alliance of Women Film Journalists applauds Whistler Film Festival’s outstanding programming and fabulous filmmaker-friendly atmosphere. We are delighted and honored to have an ongoing partnership with the festival to present EDA Awards in recognition of women’s outstanding achievements in filmmaking. Here’s to a great 2014 festival!” said Jennifer Merin, AWFJ’s president.

Films eligible for the EDA Awards are part of the festival’s regular program, and are being nominated in both narrative and nonfiction categories by Whistler Film Festival’s administration and programmers.

The EDA Awards will be presented to winners at the Whistler Film Festival’s awards ceremony on December 7, 2014.

Jury panels for both EDA Awards categories will be drawn from the AWFJ membership, with five jurors assigned to each panel. Chairperson for the narrative feature panel is Vancouver-based Katherine Brodsky, and chairing the documentaries panel is New York-based Jennifer Merin, who is also AWFJ’s president. The names of jury members will be announced at a later date.

ABOUT THE AWFJ and EDA AWARDS
The Alliance of Women Film Journalists, Inc. (AWFJ), a not-for-profit corporation, is an international association of leading professional female movie critics, reporters and feature writers working in print, broadcast and online media, dedicated to supporting film work by and about women – both in front of and behind the cameras – through intra-group promotional activities, outreach programs and by presenting the annual AWFJ EDA Awards in recognition of outstanding accomplishments (the best and worst) by and about women in the movies. In 2012, AWFJ launched a new program to present EDA Awards to women filmmakers in partnership with select film festivals and organizations. Film festivals to date include the Salem Film Fest and St Louis International Film Festival in the U.S., the Whistler Film Festival in Canada, Edinburgh International Film Festival and Sheffield Doc/Fest in the U.K. In June 2013, a special EDA Award will be presented as part of the 25th anniversary celebration of P.O.V., the renowned documentary series that airs on the national Public Broadcasting Service (PBS) in the United States.