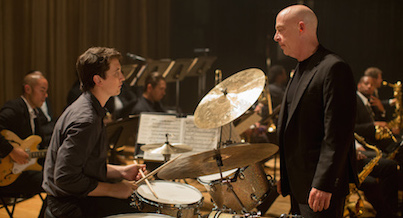 Opening Oct. 10, the AWFJ Movie of the Week is Whiplash, writer/director Damien Chazelle’s adaptation of his Sundance winning short film. At 29, Chazelle is carving out an interesting career; his eclectic resume already features the screenplay for recent Hitchcockian thriller Grand Piano, starring Elijah Wood, and Whiplash has been attracting high critical praise from all corners.

It stars Miles Teller (The Spectacular Now, Project X) as a promising young drummer who enrolls at a prestigious music academy. His burning desire to make music is put to the test, however, when he comes up against a tutor (JK Simmons) whose virulent desire to push his students to success borders on the sadistic. Read on…

While many films deal with the highs and lows of artistic ambition, few have so effectively – and honestly – got down and dirty in the blood, sweat and tears that fuel even the most natural of talent. With a pitch perfect script, assured direction and baruva performances, Whiplash simply doesn’t miss a beat.

Pam Grady: A drummer protege is as arrogant and unyielding as his despotic new mentor in Damien Chazelle’s Sundance Grand Jury and Audience Award winner Whiplash, a compelling, character-driven drama set to an irresistible jazz score and graced with powerhouse performances from stars Miles Teller and J.K. Simmons.

Sheila Roberts: My recommendation is Whiplash, an intense, exhilarating psychological drama that’s built on riveting, award-worthy performances by Miles Teller as an ambitious young drummer and J.K. Simmons as his ruthless teacher. Impressively directing by Damien Chazelle for his second feature, Whiplash is kinetic, inspiring, brutally funny, well-acted, and features some terrific editing by Tom Cross. Once you see it, you’ll understand why it was dubbed “Full Metal Jacket at Juilliard” at the Sundance Film Festival.