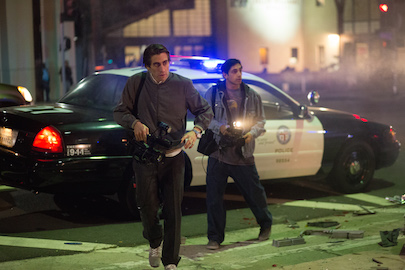 Opening Oct. 31, the AWFJ Movie of the Week is Nightcrawler, the blistering directorial debut of screenwriter Dan Gilroy (The Fall, The Bourne Legacy). Gilroy also penned this rapid-fire satire in which the unending demands of the 24 hour news cycle are the catalyst for some seriously questionable behaviour from those who report it. One such man is former drifter – and confirmed sociopath – Lou Bloom (Jake Gyllenhaal) who, after accidentally discovering his natural talent for nocturnal crime journalism, trawls the dark streets of LA searching for increasingly salacious content to satisfy network news boss Nina (Rene Russo). Read on…

While Gilroy’s story is utterly thrilling, and cinematographer Robert Elswit’s camerawork paints LA as a glittering, mesmerising urban killing field, Gyllenhall is at the beating heart of this film. In a performance described by critics as “transcendent” and a “career-best,” Gyllenhaal effortlessly embodies the edgy, borderline psychotic nature of his character to skin-crawling perfection, making Nightcrawler not just perfect Halloween viewing but absolutely unmissable, full stop.

Sheila Roberts: Nightcrawler is the ultimate edge-of-your-seat Halloween horror thriller featuring a daring, career best performance by Jake Gyllenhaal as Lou Bloom, a perversely charismatic, wildly ambitious, and completely unscrupulous sociopath. Bloom is darkly funny and absolutely terrifying as he employs cutthroat tactics to ruthlessly make his way up the food chain in his pursuit of a new career in the field of freelance TV new reporting. He learns quickly that if it bleeds, it leads, and he exploits every gory detail to promote himself and turn his coverage into a ratings monster for the local news station. Gyllenhaal is extraordinary at delivering the rapid-fire monologues Bloom spews out to justify his morally questionable methods. In his directorial debut, screenwriter Dan Gilroy has crafted a riveting character study and a sleek, nocturnal crime thriller filled with satire and pulse-pounding action. He’s adept at staging the action sequences to keep the audience fully immersed in every moment.  Gilroy’s work is supported by stunning widescreen lensing by D.P. great Robert Elswit and a hypnotic score by composer James Newton Howard. L.A. Noir has never felt scarier or looked more seductive.

Anne Brodie: Nightcrawler is a visceral, disturbing examination of a obsessive, narcissistic news videographer whose actions straddle the moral and ethical lines of newsgathering. Powerful and stunningly minimalist.

Jeanne Wolf: Nightcrawler is a one-two punch of the darkest comedy and gripping suspense make this a winner. Jake Gyllenhaal overpowers you with the performance of his career. It shouldn’t be forgotten at Oscar time.

Pam Grady: A gaunt Jake Gyllenhaal delivers one of this finest (and creepiest) performances as a thief who discovers his purpose as TV news videographer with an eye for the visceral in Dan Gilroy’s eerie thriller Nightcrawler.