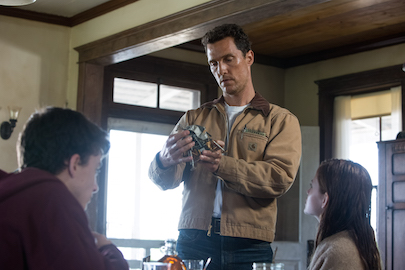 Opening Nov. 7, the AWFJ Movie of the Week is Interstellar, Christopher Nolan’s long-awaited science fiction epic. Set in a future far-removed from the shiny, technology driven visions of most filmmakers, it stars Matthew McConaughey as Cooper, a single father trying to bring up his kids on his failing farm. He is not alone in his struggles; the Earth’s food supplies are running out fast. And so, by way of a storyline that it’s best not to reveal, former NASA pilot Cooper teams up with scientist Amelia (Anne Hathaway) to man a terrifying mission to seek out a viable home for humanity. Read on…

The story of Interstellar, somewhat refreshingly given the dumbed down nature of modern cinema, relies heavily on complicated, and overwhelming, scientific theories. But Nolan and co-writer brother Jonathan are masters of harnessing human emotion and, just as in their Batman franchise, distill sweeping themes through the intimate prisms of family and love.

McConaughey is the perfect Everyman to embody these ideas, and turns in another truly impressive performance as an ordinary guy who may also be the accidental saviour of the human race. Hathaway is also excellent as the brilliant mind who must confront, and overcome, her own shortcomings, while Jessica Chastain gives a luminous performance as a character of central importance to this remarkable story.

While it may be cerebral storytelling, Interstellar unsurprisingly has some truly remarkable visuals. Cinematographer Hoyte Van Hoytema and production designer Nathan Crowley bring both the dust storms of the Midwest and the cosmic wonders of space to brilliant life, the effects being both jaw-dropping and satisfyingly realistic.

Released in multiple formats, including 70mm and IMAX, Interstellar should be seen on the biggest screen you can find.

MaryAnn Johanson: My pick is Interstellar, because a new movie from Christopher Nolan is always noteworthy, and — more importantly — it looks like it may be science fiction with an optimistic attitude about the future, which is sorely lacking in the genre.