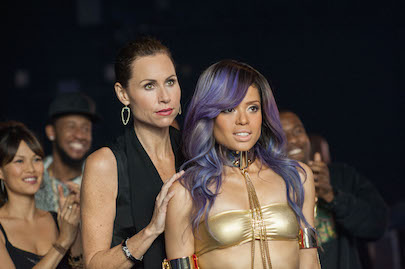 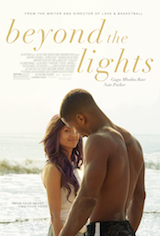 Opening Nov. 14, the AWFJ Movie of the Week is Beyond the Lights, the latest film from writer/director Gina Prince-Bythewood, the award-winning filmmaker behind the likes of Love & Basketball and The Secret Life of Bees. Here, British actress Gugu Mbatha-Raw, who recently wowed in Amma Asante’s glorious Belle, takes the central role of Noni, a talented young musician on the brink of superstardom. Although she seems to be achieving everything she ever wanted, Noni soon finds herself struggling with her newfound fame, but a burgeoning relationship with her bodyguard (Nate Parker) could provide the stability she needs. Read on…

The teaming of Prince-Bythewood and Mbatha-Raw is certainly not to be missed, and the pair turn a familiar story – the rocky ascension of a star – into something tempting and compelling. Knowing she has some excellent performers to work with, including the always excellent Minnie Driver, Prince-Bythewood allows them the space to tell her story, which is both an old school romance and a sharp modern commentary on our obsession with fame.

Nell Minow: Beyond the Lights is, in the best possible way, a throwback to the deeply romantic films of the 40’s and 50’s with some meaningful commentary on the way we objectify and commoditize performers.  With excellent work from Gugu Mbatha-Raw, Nate Parker, and Gina Prince-Blythewood, this is an intelligent and involving story.

Sheila Roberts: My recommendation is Beyond the Lights. It’s an engaging love story elevated by three strong central performances and an authentic chemistry between the leads that rings true in every scene. Writer-director Gina Prince-Bythewood is adept at handling the evolution of the film’s main character, Noni, from a troubled, suicidal artist who is struggling with the pressures of stardom and losing herself to a persona that’s been created for her by others at the beginning of the film to a happier, more confident, and grounded human being who finally finds the courage to become the artist she was meant to be and is able to navigate her own way in life and love at the end.  Veteran actress Minnie Driver and talented rising stars Gugu Mbatha-Raw and Nate Parker shine in this heartfelt romantic drama that also features a terrific soundtrack and selection of hip-hop and R&B sounds.

Jennifer Merin: Written and directed by Gina Prince-Blythwood, Beyond The Lights is an alluring love story starring Gugu Mbatha-Raw as a nova superstar singer whose career is pushing her over the emotional edge. Although it’s a growing, glowing relationship with her bodyguard (Nate Parker) that helps to ground her, the film deftly avoids a typical  damsel-in-distress cliché-rich scenario. Beautiful performances — including a seductive supportive turn by Minnie Driver – along with a great soundtrack and fine cinematic values make Beyond the Lights a rewarding must see.

Title: Beyond the Lights