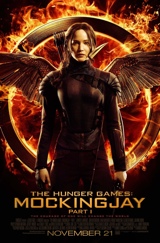 Don’t tell Hollywood I said this, but chopping the final novel of the Hunger Games trilogy into two films might be the best thing that could have happened to this franchise. I mean, it didn’t work for Harry Potter — the first Deathly Hallows film was terrible — and Peter Jackson is already two-thirds of the way (with the final third almost upon us) toward demonstrating that turning the brief Hobbit book into three long films was not artistically warranted. And it’s not even like the so-far enthralling Hunger Games films needed any help. It’s just that this might be the best possible beginning of the ending that this particular story could have gotten. Read more>>