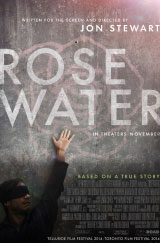 Over nearly two decades on The Daily Show, Jon Stewart has reported on stranger-than-fiction stories with a sophisticated sense of humor and an ardent refusal to take himself too seriously. But when buckling down to tell the troubling true story of journalist Maziar Bahari in Rosewater, the TV personality turned film director discards these signatures in favor of earnestness and a predominantly solemn tone. It’s a bold choice, but does it pay off? Read more.>>