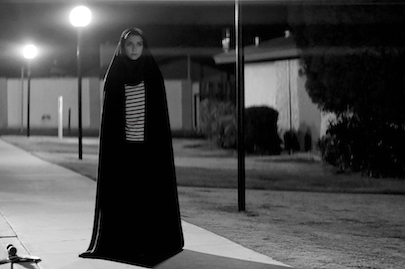 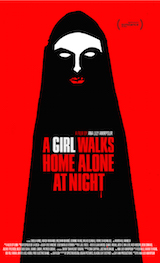 Opening Nov. 14, the AWFJ Movie of the Week is A Girl Walks Home Alone at Night, the impressive feature debut of short filmmaker Anna Lily Armipour. It stars Sheila Vand as an enigmatic, hijab wearing vampire who, while stalking the mean streets of desolate Iranian town Bad City, makes a connection with fellow lost soul Arash (Arash Marandi) a young man who dreams of escaping the harsh confines of his life. Read on…

Billed as the first Iranian vampire Western, writer-director Armipour’s film certainly borrows heavily from the tropes of that genre, featuring as it does a lone stranger dolling out bloody vigilante justice to those deemed deserving. Shooting the film in California also gives it a distinctly US visual sensibility, while Marandi is more than a little reminiscent of that all-American icon, James Dean. But, narratively speaking, Armipour’s film delves far deeper, more specifically challenging the place of women in Middle Eastern society, where a woman walking home alone is the very definition of immorality. And it’s a message made all the more powerful by the absence of any overt social soapboxing; this is a film of hushed tones and enigmatic encounters.

Forget the pubescent wranglings of Twilight; together with Jim Jarmusch’s sumptuous, romantic odyssey Only Lovers Left Alive and Jemaine Clement’s and Taika Waititi’s hilarious spoof What We Do in the Shadows, A Girl Walks Home Alone at Night marks an exciting new dawn for the vampire genre as an entirely adult proposition.

Nell Minow: A Girl Walks Home at Night — an Iranian vampire western romance?  Sign me up!

Jennifer Merin: Suspenseful and smartly subversive, A Girl Walks Home at Night is a fantasy-filtered peek at the Iranian psyche behind the veil, focusing on a woman who takes control at first bite. In the scare department, it doesn’t miss a beat.