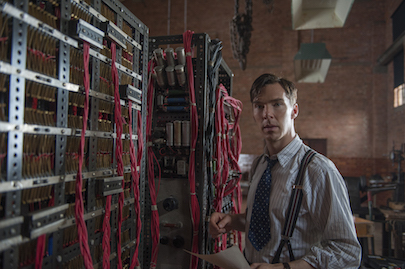 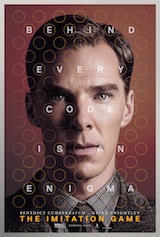 Opening Nov. 14, the AWFJ Movie of the Week is The Imitation Game, the compelling real-life story of mathematical genius Alan Turing (Benedict Cumberbatch) who, along with a crack team of numerologists, broke the Nazi’s fiendish Enigma code during World War II. Read on…

As Turing, Cumberbatch is nothing short of exceptional. ‘Oscar-worthy’ is hyperbole often heard at this time of year, but here it’s well deserved; Cumberbatch gets under the skin of Turing to present a man able to unravel the most incomprehensible mathematical problem but who completely fails to decipher the intricacies of human emotion.Elsewhere, Keira Knightley is superb as Turing’s feisty confidante and fellow code-breaker Joan  Clarke, while Matthew Goode impresses as Turing’s intellectual adversary Hugh Alexander.

This is, however, undoubtedly Cumberbatch’s film, and its success hangs on his performance. Turing himself is the real enigma here and, while the film doesn’t delve too deeply into his personal life – including the homosexuality for which he was so unjustly persecuted – this is a remarkable snapshot of a pivotal moment in both his life, and in human history.

Sheila Roberts: My pick is The Imitation Game, directed by Norwegian filmmaker Morten Tyldum from a screenplay by Graham Moore, about British mathematician, cryptanalyst and war hero Alan Turing (Benedict Cumberbatch) who is credited with cracking the unbreakable codes of Germany’s World War II Enigma machine. The film’s intense and haunting portrayal of a brilliant, complicated man offers a fresh take on the biopic genre and features an impressive cast that includes Keira Knightley, Matthew Goode, and Mark Strong.  From choosing an unexpected and visionary director who at the time was not yet recognized for his BAFTA-nominated Headhunters, to telling the complicated story through three storylines in multiple time periods and breaking them in a new and innovative way, the filmmakers have created a stirring and authentic period film we’ve not seen before that honors Turing’s legacy. The film features terrific design work by Production Designer Maria Djukovic and Costume Designer Sammy Sheldon Differ and a compelling score by Alexandre Desplat. The Imitation Game is an award-worthy film that’s a must-see.

Pam Grady: Benedict Cumberbatch delivers another stunning performance as he inhabits the soul of tortured genius Alan Turing in The Imitation Game, Morten Tyldum’s riveting drama limning both the birth of the computer through Turing and his tean’s work breaking the Nazi Enigma code and the scandal that drove him to an early death.

Ann Brodie:The Imitation Game is the terrific behind-the-scenes story of secret British efforts to crack Germany’s Enigma code during WWII. Alan Turing’s tragic story is beautifully interpreted by Benedict Cumberbatch. No question, The Imitation Game is the one we’ll be talking about during awards season. Cumberbatch’s performance is profound, wrapped around an amazing true story.

Nell Minow:The Imitation Game: It’s hard to make a gripping thriller out of an historical event where we know the outcome. But this film does, and, as a bonus, it shows the important and under-appreciated contribution made by the women at Bletchley.

Jeanne Wolf: My pick is The Imitation Game. Benedict Cumberbatch uses his intuitive skills and his acting skills to deliver a compelling movie with an ironically sad outcome.

Jennifer Merin: The Imitation Game is a fascinating fictionalized account of the life of Alan Turing (Benedict Cumberbatch), the brilliant British mathematician whose cryptology skills contributed to the defeat of the Germans in World War II. Turing, an Oxford scholar, was recruited by the British government to be part of a team charged with the task of deciphering enemy messages about troop movements and planned attacks transmitted via the extremely sophisticated and presumably unbeatable German coding machine known as “Enigma.” Turing’s proposed solution was to build a machine – the world’s first digital computer – that could decipher a code key on a daily basis. Turing’s invention really initiated the computing/digital age that has by now transformed society. Turing, whose undeniable brilliance was an asset to the decryption team, was a social outcast. His only friend and ally was Joan Clarke (Keira Knightley) who was his fierce protector and intellectual partner, but was forced work on the decryption team secretly because – in keeping with the social mores of the times — her parents frowned on her working with men at a ‘man’s job.’ Also in keeping with the times, Turing’s closeted homosexuality, which was eventually discovered by authorities, lead to his arrest and prosecution, loss of credibility and public disgrace. This beautifully crafted biopic is rich in its revelations about how society has treated – and still does – individuals whose point of view differ from what’s deemed to be the norm. Cumberbatch’s brilliant performance is already garnering Oscars buzz. The Imitation Game is another must see.