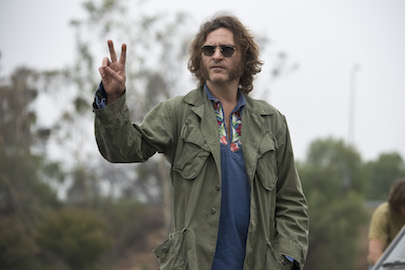 Opening Dec. 12, the AWFJ Movie of the Week is Inherent Vice, the latest work from writer/director Paul Thomas Anderson (There Will Be Blood, The Master). An adaptation of Thomas Pynchon’s novel – Anderson being a self-confessed mega fan of the author – the film reunites Anderson with his Master star Joaquin Phoenix, who here takes the lead role of cop Larry ‘Doc’ Sportello. Working in LA in 1970, Sportello is fuelled – like most of the city – by a heady mix of drink and drugs, and finds himself rather over his head while investigating the disappearance of ex-girlfriend Shasta (ethereal newcomer Karen Waterston). Read on…

Combining the freewheeling tone of Boogie Nights with the narrative scope of Anderson’s later work, Inherent Vice may initially seem like one man’s riotous journey through LA’s insane underbelly, but actually paints a picture of a city on the cusp of monumental change. The dawn of the 1970s sounded the death knell for the optimistic ideals of the 1960s, and the emergence of harder drugs brought with it new and dangerous paranoias, and Anderson ensures that Pynchon’s explorations of this seismic change remain intact.

As Sportello, Phoenix is deliciously off-kilter, stumbling through a city that’s lit in shades of neon by cinematographer Robert Elswit, and a story that’s part stoner comedy and part social history. With it’s detached aesthetic and surreal humour, Inherent Vice is likely to divide opinion – but you’ll see nothing else like it.

MaryAnn Johanson: My pick is Inherent Vice, because (having seen the film) I suspect this is going to be the most divisive PTA film yet.

Magician: The Astonishing Life and Work of Orson Wells