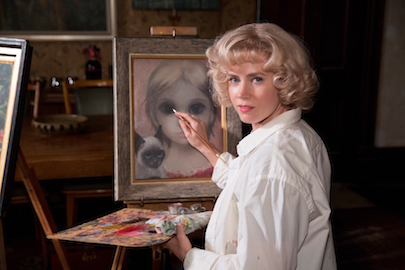 Opening Dec. 25, the AWFJ Movie of the Week is Big Eyes, the latest film from director Tim Burton (Corpse Bride, Alice in Wonderland, Frankenweenie). Here, he shifts his focus from the fantastical and otherworldy to real life 1950s housewife-turned-artist Margaret Keane (Amy Adams), who enjoyed huge success during the period with her paintings depicting spellbinding big-eyed children. The caveat, however, was that her husband Walter (Christoph Waltz) took credit for the work, arguing that paintings would sell better with a male signature attached. While Margaret first accepted his thieving of her talent, the pair would later enter into a vicious lawsuit. Read on…

In depicting the artist herself, Adams puts in a performance described by critics as ‘pitch-perfect’, exploring both the free spirit of artistic creativity and the shackles so often placed on talented women by the men around them. Waltz, too, is excellent as Margaret’s increasingly overbearing husband, an effective and compelling figurehead for a suffocating patriarchal society. In allowing them the space to tell this remarkable story, and being unafraid to explore its darker themes, Burton and screenwriters Scott Alexander and Larry Karaszewski, have created both a fascinating biopic and a truly feminist piece of cinema.

Pam Grady: The curious case of the big-eyed waifs, those kitschy paintings that decorated American homes in the 1950s and ’60s gets an airing in Big Eyes. Amy Adams is pitch-perfect as artist Margaret Keane in Tim Burton’s often funny and oddly poignant investigation into the strange tale of Margaret, her self-promoting husband Walter (Christoph Waltz), and the art fraud that captivated a nation.

Jennifer Merin: Big Eyes gives you a glimpse into the world of Margaret Keane, the painter whose portraits of wide-eyed waifs were all the rage during the 1950s and ’60s, but whose husband Walter stole all the credit for their creation. Amy Adams is marvelous as the woman who decides she’s no longer going to live in her husband’s shadow and support his art fraud, and director Tim Burton hits all the right feminist notes in setting the stage for her inspiring breakout. This is a must see!

MaryAnn Johanson: My pick is Big Eyes, in which Tim Burton puts a feminist spin on some of the themes he explored in Ed Wood. It’s one of my favorite films of the year.

Anne Brodie: I just saw Tim Burton’s Big Eyes and was completely transfixed. Maybe it was those weirdly frightening eyes Margaret Keane painted or Burton’s spellbinding direction, but it was more than a story, it was a semi-surreal experience “in living color.”