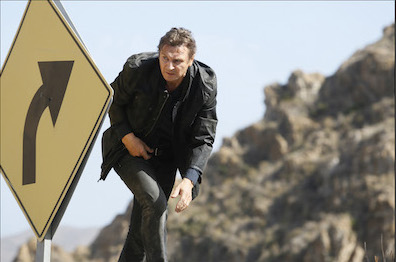 Opening Jan. 9, the AWFJ Movie of the Week is Taken 3, the third – and apparently final – outing for ex-spy Bryan Mills (Liam Neeson), who this time must call upon his particular set of professional skills after he is wrongly accused of a brutal murder. Read on…

The first Taken film has become a modern action classic, cementing Neeson as a no-nonsense, take-no-prisoners hero who you can’t help but root for. And as this is directed by genre stalwart Oliver Megaton (Taken 2, Transporter 3), you can expect plenty of opportunity for Neeson to do what he does so well. Elsewhere, Famke Janssen and Maggie Grace are back as Bryan’s wife and daughter respectively, while Forest Whitaker and Dougray Scott are also on board for this adventure.

Anne Brodie: Liam Neeson nails action like few others. His graceful moves and steely eyes aren’t for playtime and his motives are always based in nobility, despite the body count.  I’m anticipating Taken 3 will contribute to his late life action hero métier  – a reinvention – brilliantly.

Pam Grady: Liam Neeson promises to enliven the doldrums of January as he once more dons the persona of ex-spy Bryan Mills who takes on the United States’ entire security apparatus when he’s framed for murder in the action thriller Taken 3.