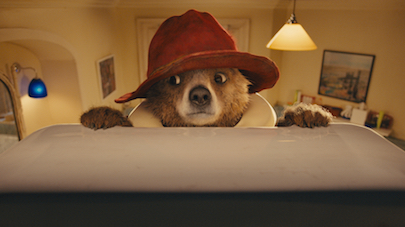 Opening Jan. 16, the AWFJ Movie of the Week is Paddington, the live action adaptation of the beloved children’s stories by Michael Bond. Written and directed by Paul King (TV’s The Mighty Boosh, Bunny and the Bull), the film combines his irreverent sense of humour with the books’ inherent charm to entirely wonderful effect. Read on…

A fortuitous eleventh hour replacement for Colin Firth, Ben Whishaw is perfectly cast as the voice of Paddington, the innocent young bear who journeys from Peru to London in search of the explorer who first introduced his relatives to the joys of marmalade and the English language. Similarly, Hugh Bonneville and Sally Hawkins are wonderful as Mr and Mrs Brown, who take Paddington into their family home, while Nicole Kidman has tremendous fun as the villainous taxidermist Milicent who has the unsuspecting bear firmly in her sights.

With a sharp, knowing script and stunning visuals – Paddington is expertly rendered in flawless CGI, while London is portrayed as a vibrant, whimsical playground – and a cast packed with top drawer British talent, this truly magical film can’t fail to delight audiences of all ages. An unadulterated joy.

MaryAnn Johanson: My pick is Paddington, one of the sweetest, gentlest children’s fantasies in ages… and also one of the sharpest and most progressive. It’s a completely delightful film in every respect.

Jeanne Wolf:Paddington is such a wonderful fun. This delightful movie crosses ages to deliver awe and giggles. The animation (please don’t tell everyone that Paddington isn’t real) is fabulous.

Anne Brodie:Paddington is an old fashioned live action / animated film that recalls the lushly realised “fairytale” films of the 80’s and 90’s, and features terrific actors for oomph.=

Son of a Gun (limited)