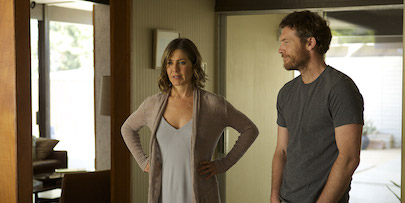 Opening Jan. 23, the AWFJ Movie of the Week is Cake, the new drama from writer-director Daniel Barnz (Beastly, Won’t Back Down) which has been garnering huge critical buzz for Jennifer Aniston’s central performance. Am actress known for her comedy prowess, Aniston puts in a dark, dramatic turn as Claire Bennett, a woman caught in the throws of a very personal tragedy who becomes obsessed with the suicide of a young woman (Anna Kendrick) from her local pain support group with whom she converses with in hallucinatory sequences. Read on…

She may have been overlooked by the Academy, but Aniston’s emotional performance is the driving force of the film,and her scenes both with Kendrick and Adriana Barazza, who plays Claire’s deliciously acerbic housekeeper Silvana, make for some truly unmissable cinema. Raw, painful and utterly absorbing, Cake is a powerful and moving study of women truly on the verge.

Nell Minow: Cake — Because when Jennifer Aniston has an opportunity, she has breathtaking honesty as an actor.

Anne Brodie: Jennifer Aniston is so nakedly viscerally vulnerable in Cake it hurts. This is her moment.

Son of a Gun

The Boy Next Door

The Duke of Burgandy