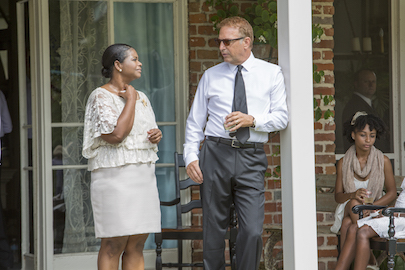 Opening Jan. 30, the AWFJ Movie of the Week is Black or White, which reunites star Kevin Costner with writer/director Mike Binder (Man About Town, Reign Over Me) a decade after The Upside of Anger. Here, Costner takes the role of Elliot Anderson, a recently widowed lawyer who finds himself drawn into a brutal custody battle for his (mixed-race) granddaughter Eloise (newcomer Jillian Estell), who he has helped raise since her mother died during childbirth and her drug addict father proved incapable, Going up against Eloise’s iron-willed paternal grandmother Rowena (Octavia Spencer), Elliot must pull himself together and use his professional arsenal if he is to keep hold of the only family he has left. Read on…

As is likely clear by the title, race is a central theme here and Binder keeps control of the hot button issue with a steady hand, while being unafraid to tackle the subject head on. He’s helped by Costner, who puts in a solid performance, showcasing a determination of spirit and dark humour that makes his character all the more sympathetic. Spencer is also on excellent form, playing a force of nature who can’t help but demand attention each time she’s onscreen.

That Black or White is inspired from a chapter in Binder’s own family history is clear from its personal tone and that, along with its two great lead performances, are its greatest strengths.

Pam Grady: A decade after their first collaboration on The Upside of Anger, filmmaker Mike Binder and star Kevin Costner reunite with Black or White, a drama as timely as today’s headlines in its limning of the state of American race relations as Costner and Octavia Spencer play grandparents arguing over custody of their mixed-raced grandchild.

Jeanne Wolf: Black or White is a wonderful and thoughtful surprise. Kevin Costner impresses with his warmth and love.

The Truth About You

Hard to be a God