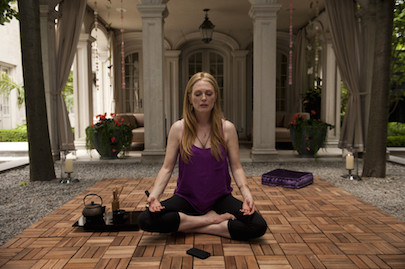 Opening Feb. 27, the AWFJ Movie of the Week is Maps to the Stars, the new film from director David Cronenberg (Videodrome, Cosmopolis, Maps to the Stars). The screenplay by Bruce Wagner (Scenes from the Class Struggle in Beverly Hills) takes a deeply satirical look at the inner workings of the LA film industry. Mia Wasikowska takes the role of Agatha, a new arrival in Hollywood, who finds herself working as a personal assistant to the unhinged actress Havana (Julianne Moore), who is haunted by the ghost of her dead mother and never far away from a complete breakdown. Read on…

The narrative twists and turns through the city of dreams, following Agatha’s journey into the dark heart of Tinseltown, where greed fuels ambition, child stars turn into addicts as a matter of course and everyone – from pushy parents to ruthless agents – are set on exploiting others for their own gain.

It’s a cutting, knowing look at the realities of the modern obsession with fame, and Cronenberg’s trademark sharpness of touch is perfect for this subject. It also boasts some brilliant performances, not least from Moore, who brings a delicious blend of glamour and neurosis to her role, and Wasikowska as the seemingly innocent interloper who brings her own set of secrets and lies. It also looks absolutely stunning, cinematographer Peter Suschitzky capturing both sides of LA; the neon dreamland that lures so many hopeful souls, and the shadowy streets that so often claim them. Another must see from one of the enduring masters of cinema.

Sheila Roberts: My recommendation is Maps to the Stars. David Cronenberg’s sharply directed, crisply paced satire takes audiences on an unexpected and fascinating journey through Tinseltown where reality is relative. It features strong performances by A-list actors portraying tragically dysfunctional characters that are shallow, envious, self-obsessed, and willing to pursue success at any price. It’s humorous, haunting, visually stunning, and features great work by DP Peter Suschitzky and an impressive score by Howard Shore. Julianne Moore’s performance is riveting.

Kristy Puchko: Maps to the Stars is a hideous brand of comedy that is not for everyone. Read more>>>

MaryAnn Johanson: My pick is Maps to the Stars, a searingly bitter look at how Hollywood messes people up.

Title: Maps to the Stars

Maps to the Stars

Out of the Dark