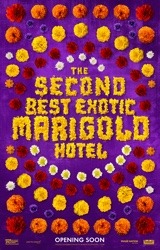 Well, what else were they going to call the sequel? At least there is an actual “second best” iteration of Sonny Kapoor’s (Dev Patel) residential hotel in the works: he is ready to expand into a new location in Jaipur, thanks in part to the steady business hand of his partner and one-time first guest (back in the previous film, that is), Muriel (Maggie Smith). There actually isn’t much of the way of story this time around, just some gentle dramedy, as everyone is prodded to settle into the ex-pat retirements they chose in the first film; this is a more subtle film than last time out, with comedy that’s less clunky and characters more nuanced. Read more>>