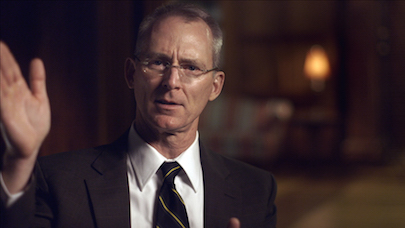 Opening March 6, the AWFJ Movie of the Week is Merchants of Doubt, the new documentary from Oscar-nominated filmmaker Robert Kenner (Food, Inc). Here, he turns his attention to the shadowy world of pundits-for-hire, shining a light on the infuriating ways in which huge organisations attempt to sway public opinion against those inconvenient truths that may have a negative impact on their popularity and, more importantly, their profits. These often take the form of highly paid, media-savvy individuals who talk a good game to persuade the general public that scientific fact – smoking kills, for example, or climate change is something to worry about – is actually unfounded social hysteria. Read on…

By employing sleight of hand magician Jamy Ian Swiss to explain how audiences can be so deceived, and by utilising well-chosen and wide-ranging archive footage and expert interviews, Kenner presents an effective expose of how the practice of corporate misdirection maintains the illusion of intelligent discourse, while actually working to prevent any damaging public or legal action. Fascinating and blood-boiling in equal measure.

Pam Grady: Robert Kenner follows  up his acclaimed documentary Food, Inc. with another takedown, Merchants of Doubt, a rollicking expose of the think tanks and spinmeisters whose goal is to steer public opinion and to whom truth is only a minor inconvenience.

Nell Minow: As Daniel Patrick Moynihan said, “Everyone is entitled to his own opinion, but no one is entitled to his own facts.” Merchants of Doubt is about the way big corporations and wealthy one percenters hide and distort the facts to obstruct government. It is a vitally important documentary about the cynical, corrupt undermining of science by corporations in pursuit of short-term returns.

Cate Marquis: My pick is Merchants of Doubt. A documentary about this kind of insidious industry, so-called experts hired to create public uncertainty about science topics, underscores a flaw in modern news reporting that more people need to know about. The under-reported makes this documentary an attention grabber for me.

Bad Asses on the Bayou